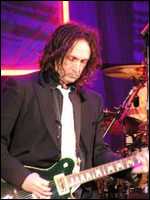 Michael Wayne "Mike" Campbell (born February 1, 1950) is an American guitarist and record producer, best known for his work with Tom Petty and the Heartbreakers.

In addition to his work as a guitarist, Campbell is also a producer and songwriter in his own right.

Campbell was born in Panama City, Florida. He grew up there and in Jacksonville, Florida, where he graduated from Jean Ribault High School in 1968. At 16, he bought his first guitar, a cheap Harmony model, from a pawnshop. His first electric guitar was a $60 Goya. Like Tom Petty, Campbell drew his strongest influences from The Byrds and Bob Dylan, with additional inspiration coming from guitarists such as Scotty Moore, Luther Perkins, George Harrison, Carl Wilson, Jerry Garcia, Roger McGuinn, Keith Richards, Brian Jones, Jimmy Page, Mick Taylor, and Neil Young. The first song he learned to play was "Baby Let Me Follow You Down," a song which appeared on Dylan's eponymous debut album.

He formed a band named Dead or Alive which quickly disbanded. He first met Petty through Mudcrutch drummer Randall Marsh when they were auditioning him and he suggested his friend Mike to play rhythm guitar.

Mudcrutch moved to L.A. and signed a record deal with Shelter Records, recording an album in 1974 that ended up being shelved. Campbell then joined Petty to found the original Tom Petty and the Heartbreakers in 1975 along with Benmont Tench (keyboards), Ron Blair (bass guitar) and Stan Lynch (drums).

Like the other players in the Heartbreakers, Campbell avoids the virtuoso approach to playing, preferring to have his work serve the needs of each song. Guitar World magazine noted "there are only a handful of guitarists who can claim to have never wasted a note. Mike Campbell is certainly one of them". He is a highly melodic player, often using two or three-strings-at-a-time leads instead of the more conventional one-at-a-time approach. "People have told me that my playing sounds like bagpipes," he muses. "I'm not exactly sure what that means." His estimation of his own style is typically modest: "I don't think people can really top Jimi Hendrix and Eric Clapton as far as lead guitar goes. I like my playing to bring out the songs." Like Tench, he is heavily involved in constructing the arrangements for the Heartbreakers' tunes. And also like Tench, he prefers rawness to polish in the studio and onstage.

Campbell co-produced the Heartbreakers albums Southern Accents, Pack Up the Plantation: Live!, Let Me Up (I've Had Enough), Into the Great Wide Open, She's the One, Echo, The Last DJ and Mojo, as well as the Petty solo albums Full Moon Fever, Wildflowers, and Highway Companion.

Outside the Heartbreakers, Campbell has co-written and performed on an array of songs including "The Boys of Summer" and "Heart of the Matter" (both with Don Henley). Other songwriting and performance credits include songs for The Blue Stingrays, Johnny Cash, Fleetwood Mac, Lone Justice, Roger McGuinn, Tracy Chapman, George Harrison, Stevie Nicks, John Prine, Restless Sleeper, Patti Scialfa, Brian Setzer, J.D. Souther, Jackson Browne, The Williams Brothers and Robin Zander. He also produced four songs on Roy Orbison's Mystery Girl album and played guitar on The Wallflowers' "Sixth Avenue Heartache."[1]

Mike Campbell now still tours and works on albums with Tom Petty and the Heartbreakers and is involved with his side-band, The Dirty Knobs. "It's rougher-edged [than Petty's material]," Campbell says of his Knobs. "It's slightly over-driven, less polished, lots of Sixties influenceThe Kinks, Zeppelin, the Animals. It's something I probably should have done a long time ago, but I didn't 'cause I was wrapped up in the Heartbreakers." Some Dirty Knobs material has been recorded and they have more songs at the ready, but they're not shopping for a deal and are content to work occasional club gigs in Los Angeles.

A Mike Campbell solo album won't be released any time soon. He shrugs off the idea: "I wouldn't want to do an all-instrumental album because I like the songs and I like to hear singers. In the Heartbreakers I've got a great writer and a great singer to work with on my songs. Where else would I be able to find anyone who could match Tom Petty?"

"All of us in the band are very single minded about music. It's all we know how to do, and we're pretty much helpless in any other realm of life. If someone took all the bucks away, we'd just starve! (laughs) We'd be totally useless to civilization! Really, I'm a musician and that's what I do. I don't know what else I could or would do," Mike said in a 1999 interview with fans on tompetty.com.

Petty continues to be impressed by Mike's playing ability, and he will catch himself looking over at Mike while he's soloing, thinking, "God, how does he do this? When he does [a solo], it kind of races through my head, 'Boy I like that!'" (WXRT Chicago Sound Opinions radio interview, April 15, 2003)

Campbell has been married to Marcie Campbell since 1975. They have had two daughters, Brie and Kelsey (the latter of whom provided vocals to the Full Moon Fever track "Zombie Zoo") and one son, Darian.

In 2007, he joined a reformed Mudcrutch along with Petty, Tench, Tom Leadon and Randall Marsh.

Campbell plays the guitar and the mandolin in Bob Dylan's 2009 album Together Through Life.

Ludwig van Beethoven Sinfonia n. 1 in do maggiore op. 21
Update Required To play the media you will need to either update your browser to a recent version or update your Flash plugin.