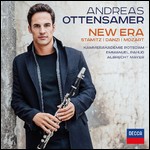 Andreas Ottensamer (born 4 April 1989 in Vienna) is an Austrian clarinettist and is the principal clarinettist of the Berlin Philharmonic.

Ottensamer commenced his musical studies in 1999 on piano in his hometown and then at the University of Music and Performing Arts, Vienna, on violoncello with Wolfgang Herzer and then from 2003 clarinet with Johann Hindler. Ottensamer is also enrolled as a student at Harvard University in the United States. Ottensamer first gained his orchestral experience as substitute clarinet in the Vienna State Opera and the Vienna Philharmonic and is a former member of the Gustav Mahler Youth Orchestra. In October 2009, he was a fellow of the Orchestra Academy of the Berlin Philharmonic. From July 2010 to February 2011, he was solo clarinettist of the German Symphony Orchestra, Berlin and since March 2011 he fills the position of solo clarinet with the Berlin Philharmonic.[1]

The first prize winner of several competitions with the instruments of clarinet, piano and cello, Ottensamer has performed as soloist and chamber musician worldwide with partners such as the Vienna Virtuosi (members of the Vienna Philharmonic), the Vienna Chamber Orchestra and performers including Leif Ove Andsnes, Angelika Kirchschlager, Julian Rachlin and Yo-Yo Ma. In 2005, together with father Ernst Ottensamer and his older brother Daniel Ottensamer (both solo clarinettists of the Vienna Philharmonic), formed the clarinet trio The Clarinotts. The ensemble gives concert tours in Austria, Germany, Italy, Japan, the United States, performs at festivals all over the world, appeared on TV and radio and in 1999 recorded a CD published by Gramola Vienna and Octavia Records.

Ottensamer accompanied Tori Amos on her 2011 album Night of Hunters.

In 2013 Ottensamer entered an exclusive recording agreement with Universal Classics's Mercury Classics label, in partnership with Deutsche Grammophon. This makes him the first clarinettist to release exclusively through DG. His debut album, Portraits - The Clarinet Album, was released in June 2013 internationally through Mercury Classics]/Deutsche Grammophon and features concertos by Domenico Cimarosa, George Gershwin and Aaron Copland recorded with the Rotterdam Philharmonic Orchestra and Yannick Nézet-Séguin.

Joseph Joachim Notturno per violino e orchestra op. 12
Update Required To play the media you will need to either update your browser to a recent version or update your Flash plugin.