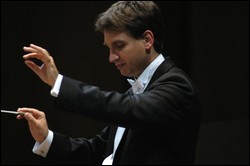 Hamar started to play the piano at the age of six and later studied composition at the Bela Bartok Conservatoire. He followed university studies at the Franz Liszt Academy of Music, Budapest, where he had courses in composition with Emil Petrovics and in conducting with Ervin Lukacs and Tamas Gal; he graduated in 1995. In the following years he won 2nd prize and public prize of the 8th International Competition in conducting of the Hungarian Television, the 2nd prize of the Conductors Competition in Cadaques in 1996, the 1st prize of the International Conductors Competition of the Portuguese Radio in 1997 and the 1st prize of the 6th International Antonio Pedrotti Conductors Competition in Trento. He had meanwhile conducted nearly all symphonic orchestras in Hungary. In 1997 he was invited by musical director Zoltan Kocsis to become first permanent conductor of the Hungarian National Philharmonic Orchestra. In 1998 Hamar assisted Lorin Maazel for Verdis Don Carlos at the Salzburger Festspiele. From 2000 until 2009 September he was music director of Pannon Philharmonics Pécs. He was permanent guest conductor of the Orchestra di Padova e del Veneto.

Hamar is constantly guest at international opera houses, as recently at the Teatro National de Sao Carlo in Lisbon with La traviata and at the Teatro Treviso with Don Giovanni. He was a guest conductor at the Zürcher Oper, including three premieres. At the Oper Frankfurt, he conducted Eugène D'Albert's Tiefland and a new production of Verdis I masnadieri. He had concerts with symphony orchestras all over the world, such as Calgary, Zagreb, Ljubljana (Slovenian Philharmonic), Switzerland (Lucerne Symphony Orchestra), Salzburg (Mozarteum Orchestra), Graz (Vienna Radio Symphony Orchestra), and the Bruckner Orchestra in the Brucknerhaus Linz. For the latter concert he was acclaimed as a "sensation as a conductor" and conductor of top quality" in the Austrian press. He recorded works of Franz Liszt with the Hungarian National Philharmonic Orchestra, Mahler's Symphony No. 1 with the Pannon Philharmonic Orchestra.

From 2012, Hamar will be the General Musical Director (GMD) of the Hessisches Staatstheater Wiesbaden, Germany.

Wolfgang Amadeus Mozart "Batti, batti, o bel Masetto" dall'opera "Don Giovanni"
Update Required To play the media you will need to either update your browser to a recent version or update your Flash plugin.