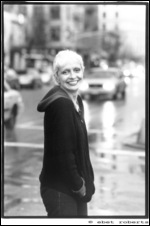 Leni Stern (born Magdalena Thora[1] in Munich, Germany) is an electric guitarist, singer, and n'goni (Malian banjo-guitar) player. She was interested in music from an early age, beginning piano studies at the age of six and taking on the guitar age of eleven. Forming her own acting company at the age of seventeen, Stern attracted media attention and performed her radical productions in front of sold-out European crowds.

In 1977, Stern chose music over acting, and left Germany for the United States to attend the Berklee College of Music in Boston, studying film scoring. She gave up film scoring in favor of the guitar and moved to New York City in 1981, playing in various rock and jazz bands. In 1983, she formed a band of her own with Paul Motian on drums and Bill Frisell on guitar.

She has released thirteen solo recordings, the latest being 2012's "Smoke, No Fire" recorded in Bamako, Mali. The 1985 Clairvoyant was the first. Her most recent releases juxtapose Stern's trademark inventive guitar and vocal explorations with the indigenous sounds of accomplished African instrumentalists and singers. Her cover of Laura Nyro's song "Upstairs by a Chinese Lamp" appeared on Time and Love: The Music of Laura Nyro, the Laura Nyro tribute album. Leni Stern Recordings (LSR) was established in 1997. The record label seeks to put out music from the most creative artists in jazz and songwriting. LSR's first release was Stern's first full-length vocal release, Black Guitar. Ted Drozdowski of the Boston Phoenix described Stern's voice sounding "something like Marlene Dietrich borrowing Billie Holiday's phrasing."

She is married to guitarist Mike Stern.

Jean-Louis Duport 1.Satz Cellokonzert Nr.6 d-moll
Update Required To play the media you will need to either update your browser to a recent version or update your Flash plugin.