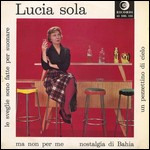 Born in Bologna, Emilia-Romagna, Italy,[1] Mannucci relocated to Milan at a young age. She attend the Art of Movement school directed by Carla Strauss. She successfully auditioned for EIAR, the Italian national radio broadcasting company, and worked as a singer for the various radio orchestras. She toured Italy for some years, working with the such entertainers as Gorni Kramer, Natalino Otto, and the Quartetto Cetra.

On 19 August 1944, she married Virgilio Savona, one of the singers of the Quartetto Cetra.[1] Three years later, she also joined the quartet, replacing Enrico De Angelis.

Mannucci was the only female member of Quartetto Cetra, but she also had a successful career as a solo singer. Besides working with Quartetto Cetra, Mannucci pursued a solo career as singer, musical actress, and TV show hostess. She and her husband also did research on folk music.

Henry Vieuxtemps Concerto pour violon et orchestre No 6 en sol majeur op. 47
Update Required To play the media you will need to either update your browser to a recent version or update your Flash plugin.