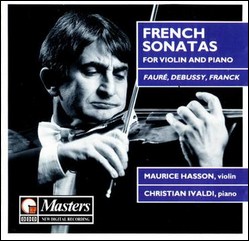 Born in France in 1934, and studied violin at the Paris Conservatoire, where he won a First Prize for Violin (the first Prix d'Honneur" to be awarded for a long time) and a "Grand Prix" for chamber music. He later became a pupil of Henryk Szeryng, and emigrated with his first wife, pianist Monique Duphil, and their two daughters to Venezuela from 1960-73.[6]

He made his USA debut with the Cleveland Orchestra conducted by Lorin Maazel, and since then he has performed with virtually all the major orchestras both in Europe, Israel and the United States.[7]

Hasson previously owned the 1727 'Benvenuti' Stradivarius, also known as the ex Halphen, but currently, he is playing on a Domenico Montagnana violin and a Guadagnini instrument and owns many other violins.

Hasson currently since 1973 lives in London with his second wife, Janet (born Hoogesteijn), with whom he has two children and four grandchildren, and is a professor of violin at the Royal Academy of Music.

Wilhelm Kienzl "Selig sind, die Verfolgung leiden" extrait du drame musicale "L'Evangéliste"
Update Required To play the media you will need to either update your browser to a recent version or update your Flash plugin.