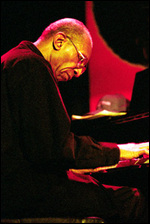 Ronnie Mathews (December 2, 1935 in New York City June 28, 2008 in Brooklyn) was an American jazz pianist who worked with Max Roach from 1963 to 1968 and Art Blakey's Jazz Messengers. He acted as lead in recording from 1963 and 1978 - 1979. His most recent work was in 2008, as both a mentor and musician with "Generations", a group of jazz musicians headed by veteran drummer Jimmy Cobb. He contributed two new compositions to the album that was released by San Francisco State University's International Center for the Arts on September 15, 2008.

According to the New York Daily News, "Ronnie Mathews (is) another stalwart figure who has yet to receive the proper recognition." Critics have compared him to fellow pianists Thelonious Monk and Bud Powell, with a sprinkle of McCoy Tyner.[1]

In his twenties, Mathews toured internationally and recorded with Roach, Freddie Hubbard and Roy Haynes. He was also a member of Art Blakey's Jazz Messengers in the late 1950s through the 60's. By thirty, he began teaching jazz piano and led workshops, clinics and master classes at Long Island University in New York City. Besides Dexter Gordon and Clark Terry, he toured and recorded on two Louis Hayes projects in the 70's (i.e. the Louis Hayes-Woody Shaw Quintet and the Louis Hayes-Junior Cook Quintet).[2]

One of the highlights of his career, and one of his longest associations, was with the Johnny Griffin Quartet. For almost five years (1978-1982) he was an integral part of this band and forged lasting relationships with Griffin, Kenny Washington (drums) and Ray Drummond (bass). The New York Times described Mathews as "a constant and provocative challenge to Mr. Griffin. [...He] is the energizer of the group".[3] One of the few Johnny Griffin recordings that features Mathews' original compositions is "To the Ladies" (Galaxy).

In the 80's, Mathews began honing his role as a front man. He performed as a leader in duo, trio and quartet configurations around the world (from New York City to Genova, to the North Sea Jazz Festival in the Netherlands, and more). He also toured with Freddie Hubbard and Dizzy Gillespie's United Nations Band. Mathews was also involved in cross-media projects: he was pianist for the Tony Award winning Broadway musical, Black and Blue in 1989, and, in 1990, he was one of the artists who recorded for Spike Lee's movie, Mo' Better Blues.[4]

After a stint touring and recording with the Clifford Jordan Big Band in the early 90's, Mathews joined T.S. Monk for eight years of touring and recording. The Chicago Tribune stated that "The soul of the band [...] is pianist Ronnie Mathews, whose angular romanticism provides the horn players with a lush and spicy foundation for their improvising".[5] Three CDs were recorded with the T.S. Monk, Jr. Band, including "Charm".

Mathews died of pancreatic cancer on June 28, 2008 in Brooklyn.

Ludwig van Beethoven Fantaisie pour piano en si majeur
Update Required To play the media you will need to either update your browser to a recent version or update your Flash plugin.