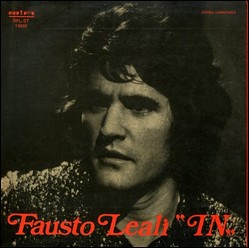 Fausto Leali (born 29 October 1944, Nuvolento, Brescia, Italy) is an Italian singer, famous for his rough and aggressive voice, in sharp contrast with Italian melody conventions. Due to his voice, he is nicknamed "The black white" ("Negro bianco").

Leali began his musical career as a singer in several bands in his native Brescia. His first guitar teacher was Tullio Romano, of the band Los Marcellos Ferial. He released his first single in 1962 as 'Fausto Denis', for the magazine Nuova Enigmistica Tascabile.[1]

Then he joined a group from Alessandria, the Novelty,[2] which had already released an EP in 1961. With the group he managed to obtain a recording contract with the record label,[3] and began to release singles, including two covers of Beatles songs, "Please Please Me" and "Lei ti ama" ("She Loves You").[4] Most of the other tracks released in the period were included in their first album, released in 1965. In 1966 Leali and the band Novelty changed their record label from Music to Ri-Fi.

His first real success was "A chi" in 1967 (an Italian version of an 1954 American song "Hurt", written by Roy Hamilton, which was also issued years later by Francesco De Gregori).[5] "A chi" sold over one million copies, and was awarded a gold disc.[6] In the same year Leali took part for the first time in the television festival Un disco per l'estate, with the song "Senza di te", but he did not progress beyond the first round.[7][8]

The following year he married the singer Milena Cantù, a former member of Clan Celentano,[3] with whom he had a daughter, Deborah, so named after the success of the homonymous song sung in that year Festival di Sanremo edition with Wilson Pickett (fourth place).

After taking part in 2006 in the Rai Due reality show, Music Farm, where he reached the finals,[19] Leali released a new album Profumo e Kerosene, with ten new songs, all in a different musical styling.

Louis Spohr Scherzo de la Symphonie No 1 en mi bémol majeur op. 20
Update Required To play the media you will need to either update your browser to a recent version or update your Flash plugin.