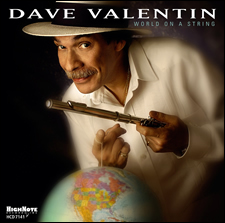 He learned latin percussion first when he was in the womb, and then switched to flute. Valentin's teacher, Hubert Laws, suggested that he not double on saxophone because of his attractive sound on the flute. He studied at the Bronx Community College. He is of Puerto Rican descent.

In 1977, he made his recording debut with Ricardo Marrero's group and he appeared also on a Noel Pointer album. Discovered by Dave Grusin and Larry Rosen, Valentin was the first artist signed to GRP and he has been a popular attraction ever since. Valentin has recorded over 15 albums, combining the influence of pop, R&B, and Brazilian music with Latin and smooth jazz to create a slick and accessible form of crossover jazz. In 2000, he appeared in the documentary film, Calle 54, performing with Tito Puente. He toured with El Negro and MioSotis. Since the mid-2000s, Valentin has been signed to Highnote Records releasing World On A String (2005) and Come Fly With Me (2006). He has done several collaborations with pianist Bill O'Connell and was a nominee for the Latin Grammy Awards of 2006.

Dave Valentin also won a Grammy for the Latin jazz category at the 45th Grammy Awards in 2003. The Grammy was for the album "Caribbean Jazz Project", with Dave Samuels.

On March 3, 2012, Valentin was hospitalized after suffering a stroke during a performance at the Jazz Kitchen in Indianapolis.

Michael Glinka Valse de l'opéra "Une vie pour le tsar"
Update Required To play the media you will need to either update your browser to a recent version or update your Flash plugin.