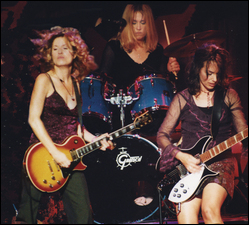 The Bangles are an American pop rock band formed in Los Angeles in 1981. They scored several hit singles as that decade continued. The band's hits include "Walk Like an Egyptian", Billboard magazine's number-one single of 1987, as well as two number-two hits, "Manic Monday" and "Hazy Shade of Winter", and their 1989 number-one single "Eternal Flame".

The early Bangles line-up of Susanna Hoffs (vocals/guitars), Vicki Peterson (guitars/vocals), Debbi Peterson (vocals/drums) and Annette Zilinskas (vocals/bass) recorded an EP in 1982, and released the single "The Real World". A legal issue forced the band to change their name at the last minute so they dropped "The" and added the letters "les" to the end to become Bangles. Their first EP was retitled Bangles and released. In 1983, Faulty Products issued a 12-inch "remix" single of "The Real World" to radio and media, but another setback came as the label folded. I.R.S. Records picked up distribution and re-issued the EP. After Zilinskas left the band to focus on her own project, Blood on the Saddle, she was replaced by Michael Steele, formerly of the all-girl band The Runaways, Toni & The Movers, Slow Children and Elton Duck.

Bangles' full-length debut album on Columbia Records, All Over the Place (1984), captured their power pop roots, featuring the singles "Hero Takes a Fall" and the Kimberley Rew-penned Beatlesque "Going Down to Liverpool" (originally recorded by Rew's band Katrina and the Waves). The record received good reviews, and the video for "Liverpool" featured Leonard Nimoy, which helped to generate further publicity.[2] This came about through a friendship between the Hoffs and Nimoy families. They received a much wider audience serving as the opening act for Cyndi Lauper on her Fun Tour.

All this went some way to attracting the attention of Prince, who gave them "Manic Monday" originally written for his group Apollonia 6. "Manic Monday" went on to become a number-two hit in the US, the UK and Germany, outsold at the time only by another Prince composition, his own "Kiss". The band's second album Different Light (1986) was more polished than its predecessor and, with the help of the worldwide number-one hit "Walk Like an Egyptian", saw the band firmly in the mainstream. The song was sent to them in mid-session and the group was divided about whether it would be a failure or a success. When the song was released the group was amazed to discover that it brought them a new audience of female fans, most of them very young. Commented Michael Steele to a Nine-O-One Network Magazine writer: "When I go out now it is usually girls who recognize me."[3]

There was friction among band members after music industry media began singling out Hoffs as the lead singer of the group, a result of Columbia Records releasing mostly singles on which Hoffs sang lead vocal. In fact, singing duties on the group's albums were evenly divided among all of the band's members, all of whom wrote or co-wrote songs.[4] Hoffs starred in the 1987 film The Allnighter, directed by her mother, Tamar Simon Hoffs, and was poorly reviewed by critics. That, and the firing of their manager Miles Copeland III, further exacerbated the dissent.[1] But they soon had another US number-two hit with a remake of Simon & Garfunkel's "A Hazy Shade of Winter" from the soundtrack of the film Less Than Zero, and the wistful "If She Knew What She Wants", written and first recorded by Jules Shear, reached the U.S. Top 30 and the German Top 20.

The album Everything (1988) was produced by Davitt Sigerson, as the band had a negative reaction to working with David Kahne on Different Light.[5] The album was another multi-platinum hit and included the top five hit "In Your Room" as well as their biggest-selling single, the soft ballad "Eternal Flame". Co-writer Billy Steinberg came up with the title after Susanna Hoffs told him about the band's recent trip to Memphis, Tennessee. The group visited Graceland, Elvis Presley's estate in Memphis. An "Eternal Flame" in memoriam to Presley is maintained on the site, but on the day the band visited, the flame had gone out and its clear-plastic enclosure was flooded. When they asked what was in the box, they were told, "That's the eternal flame".[6] The single became their biggest worldwide hit ever and the biggest single by an all-female band ever.[7] Hoffs was actually naked when she recorded the song, after being convinced by Sigerson that Olivia Newton-John got her amazing performances by recording everything while naked.[8]

By this point, the working relationships within the band had broken down, and the members went their separate ways shortly after.[4] Hoffs began a solo career, and Vicki Peterson toured as a member of the Continental Drifters and as a fill-in member of The Go-Go's.[9]

Hoffs released a solo album When You're a Boy, produced by former Bangles producer David Kahne. The album spawned a minor hit "My Side of the Bed", and the Cyndi Lauper-penned "Unconditional Love", but it stalled.

Hoffs was dropped from Columbia during the recording of her second solo album.[10] The second solo album Susanna Hoffs, released in 1996, fared better critically,[11] but it too had disappointing sales. Hoffs married film director Jay Roach (Austin Powers and Meet the Parents), and their union led to the Bangles' reunion of 2000, after Roach asked Hoffs and Debbi Peterson to write a song for Austin Powers: The Spy Who Shagged Me.[11] Vicki Peterson joined and contributed songs to the New Orleans band the Continental Drifters, which received rave reviews. Debbi Peterson had a short-lived career with Siobhan Maher under the name of Kindred Spirit. Steele had been promised by Columbia that they would back her own foray into a solo career once the Bangles disbanded. However, nothing came of it and it was suspected that it was a ploy to hasten the dissolution of the band and launch Hoffs' solo career. Michael lived in semi-retirement in California, emerging to briefly work with the bands Crash Wisdom and an even shorter stint with the semi-punk group Eyesore.

The band started drifting back together in 1998,[12] and officially re-formed to record a song for the soundtrack of Austin Powers: The Spy Who Shagged Me, at the behest of the film's director Jay Roach.[1] The song chosen for the album was "Get The Girl" and was released in 1999. The reunion continued with a tour in 2000. Later the same year, the group was also inducted into the Vocal Group Hall of Fame.[13] From 2001–2002, they were in the studio recording the album Doll Revolution at Icon Recording Studios, Hollywood, California. The album, featuring such songs as "Stealing Rosemary", "Ride the Ride", "Nickel Romeo", and the single "Something That You Said", was released in early 2003. The title track, which was written by Elvis Costello, was originally recorded for his 2002 album When I Was Cruel. Doll Revolution was a solid comeback success in Germany after the Bangles had performed in Germany's biggest television show Wetten dass, but failed to make any impact in other markets such as the UK, the U.S. and Australia. In July 2004, Paul McCartney presented the Bangles with "honorary rock'n'roll diplomas" from his Liverpool Institute for Performing Arts.[14]

In 2005, The Bangles announced the departure of Michael Steele who left due to artistic disputes over touring and recording. Steele was replaced by touring bassist Abby Travis for live appearances. Eventually, Travis was fired.[15] On December 31, 2005, the group performed "Hazy Shade of Winter" in front of Times Square and later "Eternal Flame" as part of Dick Clark's New Year's Rockin' Eve 2006. August 2007 saw the release of their first official live DVD, Return to Bangleonia – Live in Concert. In 2008, the band toured the US. Further dates included shows in Germany, the Netherlands, and at the popular Cornbury Festival in Oxfordshire, England.

In the spring of 2009, the Bangles returned to the studio to begin work on a new album entitled Sweetheart of the Sun which was released on September 27, 2011.[16][17] The band went on tour in late 2011 in support of it, with dates on the East Coast, Midwest, and West Coast. Openers for the various dates included rock band Antigone Rising and power pop band A Fragile Tomorrow.[18]

In December 2013, The Bangles played two nights with three other reunited Paisley Underground bands—The Dream Syndicate, The Three O'Clock, and Rain Parade—at The Fillmore in San Francisco and The Fonda Theatre in Los Angeles (benefit concert).[19] Their set list focused on their early material, with remarks from the band at the beginning of the Fillmore show that they were going to be playing songs that they hadn't played in 30 years. In January 2014, they performed at the Whisky a Go Go in West Hollywood, California, in celebration of The Whisky's 50th anniversary.[20]

The Bangles have contributed to several compilations, as well as to many other artists' works: They provided the song "I Got Nothing" to the soundtrack album for the 1985 film The Goonies, and made a cameo appearance in Cyndi Lauper's music video for "Goonies 'R' Good Enough". Lauper later enlisted them for backup vocals in her 1986 hit song "Change of Heart". The Bangles sang backing vocals on the Hoodoo Gurus' "Good Times" from their album Blow Your Cool! in 1987. In 1988, while recording his album Full Moon Fever, Tom Petty and his lead guitarist Mike Campbell called on the group to provide backing vocals for the song "Waiting for Tonight". The song never made it to the album, but instead made the compilations Playback (1995) and Anthology: Through the Years (2000). They provided the song "Get the Girl" to Austin Powers: the Spy Who Shagged Me, with the song appearing on the "More Music from the Motion Picture, Austin Powers, the Spy Who Shagged Me" soundtrack (1999). A cover version of "Eternal Flame" was a 2001 UK number-one hit for Atomic Kitten.

In February 2001, the first-season Gilmore Girls episode "Concert Interruptus" involved a trip to see a Bangles concert, and featured cameos and music by the band.[21] There were also several references to the Bangles throughout the rest of the series; Lorelai expresses how much she likes the band on multiple occasions while Paris states that she "really likes" the band, and tells Rory that the concert was the best night of her life. Excerpts of the songs "Hero Takes a Fall" and "Eternal Flame" were featured in the concert that the Gilmore party attended. The band covered the Beatles hit "Good Day Sunshine" for the 2006 album All Together Now: Beatles Stuff for Kids of All Ages.[22] Several artists have referred to the Bangles in their own songs. The Saw Doctors include an irreverent tribute to them, "I'd Love to Kiss the Bangles", on their 2003 album Play It Again Sham!.[23]

Their song "Walk Like an Egyptian" was also used in the ending credits of a Japanese animated show, Jojo's Bizarre Adventure, Part 3: Stardust Crusaders."[24]

This article uses material from the article The Bangles from the free encyclopedia Wikipedia and it is licensed under the GNU Free Documentation License.