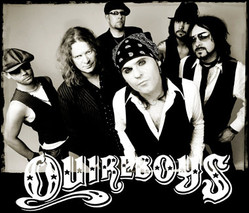 The Quireboys are an English hard rock band formed in 1984 in London, England, with strong ties to Newcastle. When the band formed they were originally known as The Queerboys and later as the London Quireboys in the United States, settling at last with their current name.[1]

The band were successful during the late 1980s and early 1990s, with their debut album A Bit of What You Fancy reaching No. 2 on the UK charts. Known as "Britain's answer to Poison" their highest charting single for the band was with the song "Hey You".

In 1993, the Quireboys broke up but briefly reformed live in 1995 with different members. A more permanent reformation came in 2001 when frontman Spike, guitarist Guy Griffin and bassist Nigel Mogg put together a new line-up. The band is still active, recording new material and playing live.

Vocalist Jonathan Gray (commonly referred to as just "Spike") moved from Newcastle upon Tyne to London when he was 17 years old.[2] Spike met guitarist Guy Bailey in a bar, through his older sister Julie, the two moved in together as flat mates, but did not even discuss playing music until a year later when a friend brought a guitar round and they began playing Chuck Berry songs.

By the mid-1980s the two decided to form a rock and roll band, the name chosen for the group was originally "The Choirboys" taken from the 1977 movie of the same name, but they soon changed it to the Queerboys. Gray and Bailey were joined by bassist Nigel Mogg (nephew of UFO's Phil Mogg),[3] Chris Johnstone on piano and Paul Martin (TV presenter), who had previously played drums with The Dogs D'Amour and with Pete Burns in the Liverpool group Nightmares in Wax.

The Queerboys started to build up a following, playing at the Marquee Club.[4] The band's drummer Paul Hornby soon left to join Dogs D'Amour, which contained future friends of the Quireboys, he was replaced by Nick Connell (known as Cozy). Connell, Bailey, Johnstone and Mark Sweetmore were old friends, having grown up together and attended Alleynes School in Stone, Staffordshire in the 1970s.

On 28 March 1986 The Queerboys appeared with Bernie Torme, and The Moho Pack at what was Klub Foot at the Clarendon Hotel Hammersmith. In May of that year, they played support dates on a Cherry Bombz tour.[5]

By 1987 the band's controversial name was starting to hinder them, it caused some of the gigs on their tour with Andy McCoy's band to be cancelled. They were also booked to play Reading Festival on the understanding that they would change their name.

Thus they changed it to the Quireboys and have kept the name ever since. They released two singles via Survival Records, entitled "Mayfair" and "There She Goes Again". Another musician from Newcastle was brought in on rhythm guitar, and Ginger made his performing debut at the Hammersmith Odeon where the band were supporting Guns N' Roses. At the end of 1989, the band released the single "7 O'Clock", which entered the Top 40 of the UK Singles Chart.

Sharon Osbourne was appointed as manager and The Quireboys were signed to EMI for the release of their debut album, A Bit of What You Fancy. By 1990, the Quireboys had fired Ginger (who went on to form The Wildhearts), who they replaced with former Cradle Snatchers guitarist Guy Griffin. For the debut album Cozy was substituted by Ian Wallace who played with Bob Dylan.[6]

The debut album was produced by a school friend of the band's Andrew Witham and entered the UK Albums Chart at No. 2. A Bit of What You Fancy drew positive reviews and was compared favourably to British rock names such as Rod Stewart and The Faces. The album was produced by Stewart's musical director and guitarist Jim Cregan.

In support of the debut, the Quireboys toured for the next year. They played with a variety of bands in different settings in the United States, including L.A. Guns, Soundgarden, The Cramps and Iggy Pop. After the tour, they also played some gigs in the United Kingdom; in Spike's hometown of Newcastle were they supported The Rolling Stones at St James' Park. Two months after the Stones show, they played in front of 72,000 people at Monsters of Rock at Donington with Whitesnake, Aerosmith, Poison and Thunder.

The long touring schedule was finished off with a gig in Japan at the Tokyo Dome on New Years Eve in front of 50,000 people. A live album was released following this long touring, entitled Recorded Around the World.

With a new drummer, Rudy Richman, they began working on the follow-up, Bitter Sweet & Twisted, which was released in 1993; but the birth of grunge changed the music scene and they were left behind. Axl Rose asked them to join the "Use Your Illusion Tour" with Guns N' Roses, and they followed the band for a while during their 1993 summer European tour.

The band reformed for a number of concerts in the mid-1990s and found themselves with a loyal following. A new line up recorded and released This Is Rock'N'Roll in 2002 and followed it with the moderately successful Well Oiled in 2004.

On 12 May 2008, The Quireboys released their next album Homewreckers & Heartbreakers on the Jerkin Crocus label. Talking about the inspiration for the new album, Paul Guerin said "It's a funny story. We were in Malmö, Sweden in the dressing room. It was just before the show and we'd had a few frothy quenchers. We were trying to come up with album titles, and everyone was laughing at the suggestions. A certain member of the band was regaling a story about something he'd done, and another member of the band said "you're just a home wrecker," and someone else said "yeah, and a heartbreaker". We were just having a laugh, and bang, there it was. It was as simple as that."[7]

In 2010, The Quireboys teamed up with Def Leppard singer Joe Elliott to record an album under the name Down 'n' Outz. Two singles were released, both of which are covers of Mott The Hoople songs: "England Rocks" (June 2010) and "Overnight Angels" (January 2011). Down 'n' Outz supported Paul Rodgers on tour in April 2011.

In March 2013, The Quireboys played aboard the Monsters of Rock Cruise, along with bands such as Cinderella, Tesla, Kix, and Queensrÿche.[8][9] The band released a new single "Too Much of a Good Thing" on 15 May 2013, taken from their seventh studio album Beautiful Curse which was released a month later in June 2013.[10]

This article uses material from the article The Quireboys from the free encyclopedia Wikipedia and it is licensed under the GNU Free Documentation License.