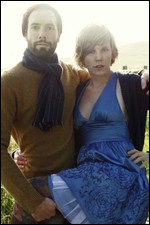 Pomplamoose is an American indie music duo consisting of multi-instrumentalists Jack Conte and Nataly Dawn. The band formed in the summer of 2008[1][2] and sold approximately 100,000 songs online in 2009.[3]

The name of the band derives from the French word pamplemousse,[4] meaning grapefruit. Pomplamoose is an English-spelling approximation of the French pronunciation.

Pomplamoose's presence is primarily videos on YouTube and MySpace, with few live performances. They have gathered over 337,000 subscribers on their YouTube channel as of June 2012. The group first gained widespread recognition when their video performance of Hail Mary was featured on the front page of YouTube. The duo recently produced the latest studio album of Julia Nunes.

Their videos mostly take the form of "VideoSongs", a medium Jack Conte defines with two rules:

On April 11, 2010, the band was interviewed on NPR's All Things Considered.[6] Conte discussed the "glitz-free" manner in which they record:

I guess I kinda don't like how there's such a pedestal for music culture and especially for band culture, it just feels fake; it feels like smoke and mirrors. I feel like music doesn't have to be like that. It can be something that's very normal and very accessible.[3]

Also in April 2010, their cover of The Chordettes' "Mr. Sandman" was used in a commercial for Toyota's Avalon series, set in an art-deco train station.[3][7]

In September 2010, Pomplamoose recorded a collaboration with Allee Willis entitled "Jungle Animal". Willis contacted the duo after hearing their cover of "September" by Earth, Wind & Fire and offered to write the new song for them. Willis also provided the single art for the song.[8]

During the Christmas season of 2010, Pomplamoose performed in several ads in the style of their YouTube videos for Hyundai singing their versions of the Christmas classics such as "O Come All Ye Faithful", "Jingle Bells", "Up on the Housetop" and "Deck the Halls".[9]

In 2011, Pomplamoose began a weekly, interactive, half-hour webcast called Hey, It's Pomplamoose: A Show about Pomplamoose and Other Things that airs every Tuesday. After the March 29th show, the webcast has been put on hiatus until their East Coast tour is completed. The tour includes Ryan Lerman, Carlos Cabrera, and Lauren O'Connell as backing band and opening act. For the Washington, DC show, Pomplamoose opened for OK Go, also known for their YouTube videos.

Both Conte and Dawn maintain solo careers, releasing videos through YouTube and songs through the iTunes Store.[10] Conte has recorded two EPs - Sleep in Color and Nightmares and Daydreams. He released them along with the compilations VideoSongs Volumes I-IV through the iTunes Store.[11] Conte's use of Electro-Harmonix audio equipment has been featured by the company in several different videos.[12][13][14] Conte's first notable appearance in mainstream media was when he supplied his voice for the "teenage boy" character in the popular videogame The Sims 2.[15] Conte first gained widespread attention when his video Yeah Yeah Yeah was featured on YouTube's main page.[16] The video, animated in stop motion, has garnered 804,361 views as of February 14, 2012. The majority of his new music is released as singles posted to YouTube in the form of "VideoSongs" (see #Recordings and performances).

Critics have reviewed Conte's solo work positively, citing evocative lyrics in Sleep in Color,[16] creative delivery of his videosongs,[17] and the tenacity to create his own niche in the Internet music market.[18] However, Amplifier magazine negatively reviewed Conte's music stating, "Hints of Conor Oberst, Radiohead, Patrick Watson, contemporary punk rock (screamo), radio power pop, and incalculable other singer-songwriters are more than borrowed, making for a short mishmash of electro rock."[19]

In 2010, Nataly Dawn in collaboration with Lauren O'Connell formed the side project group 'My Terrible Friend'.[20]

In May 2011, it was announced that Dawn would be joining Barry Manilow on his new album entitled, Fifteen Minutes, singing the song, "Letter From a Fan".[21]

VS4 is the fourth album in the series of videosong albums by Jack Conte. With the release date being March 23, 2011, Conte released "Make the Grade" as the first videosong. Conte stated at the end of the video that he will be releasing a new videosong every two weeks for the next seven months.

Conte also stated that there is a 109-page book filled with the orchestral scores, lyrics, and five full page black-and-white photos. It also includes piano and vocal transcriptions for "I Wonder Where the Moments Go", vocal arrangement for "Away", and a piano transcription for the riff in "Time of Your Life".

This article uses material from the article Pomplamoose from the free encyclopedia Wikipedia and it is licensed under the GNU Free Documentation License.