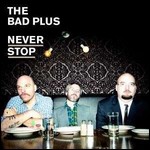 The Bad Plus is a jazz trio from the United States, consisting of pianist Ethan Iverson, bassist Reid Anderson, and drummer Dave King, originating from Minneapolis, Minnesota.

Iverson, Anderson and King first played together in 1989 but established The Bad Plus in 2000. The band recorded their first album, a self-titled effort released on Fresh Sound, after playing only three gigs together. A live performance at the Village Vanguard was heard by Columbia Records representative Yves Beauvais, and the band was signed to Columbia in 2002. Their major label debut album, These Are the Vistas, was released in 2003. This was followed by Give in 2004 and Suspicious Activity? in 2005. After parting ways with Columbia, the group signed to Heads Up Records (a division of Telarc), and released the album Prog in 2007. In early Spring of 2008 they finished recording their next studio album, For All I Care, which features vocalist Wendy Lewis. It was released in autumn 2008 in Europe and in spring 2009 in the US. In July 2010, The Bad Plus announced their album, Never Stop.[1] This was released on September 14, 2010.

Anderson and King are originally from Minnesota, and Iverson is from neighboring Wisconsin.

King is also part of the Minnesota-based groups Love-Cars; Halloween, Alaska; and Happy Apple. However, he has said that he is only in three working bands because Halloween, Alaska is more of a studio band.[2]

The trio's music combines elements of modern avant-garde jazz with rock and pop influences. The band have recorded versions of songs by Nirvana, Aphex Twin, Blondie, Pink Floyd, Ornette Coleman, Pixies, Rush, Tears for Fears, Neil Young, David Bowie, Yes, Interpol, and Black Sabbath. Blunt Object: Live in Tokyo includes a cover of Queen's "We Are the Champions" along with the jazz standard "My Funny Valentine". Suspicious Activity? contains a cover of the theme from "Chariots of Fire", while a version of "Karma Police" by Radiohead appeared on the 2006 album Exit Music: Songs with Radio Heads. The band has said that they changed their sound a little bit for their sixth album, For All I Care.[3]

The trio served as artists in residence at Duke University in 2010 and 2011. On March 24, 2011, they premiered their version of Igor Stravinsky's "The Rite of Spring" at Duke's Reynolds Theater.[4]

This article uses material from the article The Bad Plus from the free encyclopedia Wikipedia and it is licensed under the GNU Free Documentation License.