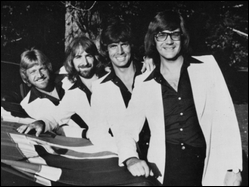 Herman's Hermits are an English beat rock band, formed in Manchester in 1964.

Originally called Herman & The Hermits, they were discovered by Harvey Lisberg, who signed them up to management. Lisberg sent a return plane ticket to Mickie Most so that he could come up from London to see the band play in Bolton. Most became the group's record producer, controlling the band's output. He emphasised a simple, non-threatening, clean-cut image, although the band originally played R&B numbers.[1] This helped Herman's Hermits become hugely successful in the mid-1960s.

Their first hit was a cover of Earl-Jean's "I'm into Something Good" (written by Gerry Goffin and Carole King), which reached No. 1 in the UK Singles Chart and No. 13 in the US in late 1964. They never topped the British charts again, but had two US Billboard Hot 100 No.1s with "Mrs. Brown, You've Got a Lovely Daughter" (originally sung by Tom Courtenay in a 1963 British TV play) and "I'm Henry the Eighth, I Am" (a British music hall song, which singer Peter Noone's Irish grandfather had been in the habit of singing when Noone was young). These songs were aimed at a US fan base, with Noone exaggerating his Mancunian accent.

In the US, their records were released on the MGM label, a company which often featured musical performers signed to record deals in Metro-Goldwyn-Mayer films. The Hermits appeared in several MGM movies, including When the Boys Meet the Girls (1965) and Hold On! (1966). They also starred in the film Mrs. Brown You've Got a Lovely Daughter (1968) and appeared in the 1965 anthology film Pop Gear.

The group appeared on The Ed Sullivan Show, The Dean Martin Show and The Jackie Gleason Show. Continued success in the US proved elusive beyond 1967, although they had as many Top Ten hits in Britain in the period 1967 through 1970 as they had had there in the years of the mid-'sixties when the band were wowing American audiences and British audiences seemed more diffident. By the time the group recorded their final album of the 1960s, Rock 'n' Roll Party, the band's success in the US was history and the album was not released by MGM there. Peter Noone left the band in 1971. Herman's Hermits reunited in 1973 to headline a successful British invasion tour of the US culminating with a standing-room-only performance at Madison Square Garden and an appearance on The Midnight Special. A later lineup with lead guitarist Derek Leckenby and drummer Barry Whitwam as the remaining original members opened for The Monkees on their 80s reunion tours of the US. The band still continues to tour today, with Whitwam as the only remaining member from the original lineup.

The band's name came from a resemblance, noted by a publican in Manchester, England, between Noone and Sherman in the Rocky and Bullwinkle cartoon. Sherman was shortened to Herman, and then became Herman and his Hermits, which was soon shortened to Herman's Hermits.[3] The band played on most of its singles, including "I'm into Something Good", "Listen People", "Can't You Hear My Heartbeat", "Leaning on a Lamp Post", "Mrs. Brown, You've Got a Lovely Daughter", "A Must to Avoid", "You Won't Be Leaving", and "I'm Henry VIII, I Am" (the last said at the time to be "the fastest-selling song in history").[4] Leckenby soloed on "Henry", and Hopwood played rhythm guitar on "Mrs. Brown".[5]

Despite the group's competent musicianship, some subsequent singles employed session musicians – including Big Jim Sullivan, Jimmy Page, John Paul Jones, Vic Flick and Bobby Graham – with contributions from the band, although the role of session players on Herman's Hermits records has been exaggerated in the rock media and in liner notes on their ABKCO Records Retrospective (which does not credit the Hermits' playing). Mickie Most used session musicians on many records he produced; this was industry practice at the time. Even such respected groups as The Yardbirds were required by Most to use session musicians (except Jimmy Page) on their Most-produced recordings.[6]

Continuing acrimony between former members of Herman's Hermits has increased the amount of misinformation about the group's role on their records; the late Derek Leckenby, in particular, was a skilled guitarist. Mickie Most commented on the VH1 My Generation: Herman's Hermits episode that the Hermits "played on a lot of their records, and some they didn't." The group played on all their US and UK No.1 hits ("I'm into Something Good", "Mrs. Brown, You've Got a Lovely Daughter", and "I'm Henry VIII, I Am"), on most of their Top Ten US singles, on a number of other singles and most album cuts. According to Peter Noone, Leckenby played the muted lead on "This Door Swings Both Ways".[7] The riff in "Silhouettes" has been variously credited to Jimmy Page, Big Jim Sullivan and Vic Flick; however, according to Keith Hopwood and Karl Green, Leckenby replaced Flick in the studio and played the signature riff under Most's direction.[7] According to Hopwood, Green and Noone, Jimmy Page played on the single "Wonderful World" (although Big Jim Sullivan lists the song as part of a session he played); both may have added to the backing track. Several writers have claimed that session players played on "I'm into Something Good"; according to the surviving band members, the song was recorded on a two-track recorder, with only a piano player in addition to the Hermits.[7]

Karl Green has noted that he preferred harder rock, but was grateful for the hand he was dealt.[8] The band's singles were written by some of the top songwriters of the day, but Noone, Leckenby, Hopwood and Green contributed lesser-known songs such as "My Reservation's Been Confirmed", "Take Love, Get Love", "Marcel's", "For Love", "Tell Me Baby", "Busy Line", Moon Shine Man", "I Know Why" and "Gaslight Street". "I Know Why" enjoyed a limited "A"-side release.[9]

The group was nominated for two Grammy awards in 1965 for "Mrs. Brown, You've Got a Lovely Daughter". According to Noone and Hopwood, the song was recorded as an afterthought in two takes – using two microphones, with Hopwood on guitar, Green on bass guitar and Whitwam on drums. Noone and the band deliberately emphasised their English accents on the record, never intended to be a single. Hopwood recalls playing a Gretsch Country Gentleman guitar in the studio, with its strings muted to create the distinctive sound. When playing the song live, Hopwood often used a Rickenbacker guitar with a rag under the bridge to duplicate the sound, which can be seen clearly in old performance clips.

Ray Davies of The Kinks wrote "Dandy" – a 1966 US Top Five hit for Herman's Hermits. Graham Gouldman wrote "No Milk Today", Herman's Hermits first UK Top Ten hit in over a year in late 1966, backed with "My Reservation's Been Confirmed".[10]

For the US release of "No Milk Today" in 1967, MGM backed it with "There's A Kind of Hush". Even though MGM put it on the B-Side, American radio stations realized "There's A Kind of Hush" was the Herman's Hermits style US audiences preferred, and it became the "hit" side, climbing to No. 4, though "No Milk Today" was also played on many radio stations and reached No. 35.[11]

The 1967 album Blaze received critical acclaim, but barely made the Top 100 in the US and was not released in the UK. Highlights according to some included original songs by Leckenby, Whitwam, Hopwood, Green and Noone, including "Ace King Queen Jack" and the psychedelic "Moon Shine Man".

When Noone left the group in 1971, the Hermits continued on, first with singer Pete Cowap. They signed with RCA Records in the UK and, as "The Hermits", recorded two singles at Strawberry Studios and an unreleased album (under the name "Sour Mash") produced by Eric Stewart. They subsequently cut singles for Buddah, Private Stock and Roulette, with little success. After a short-lived reunion with Noone, Whitwam, Leckenby and Green (who took over lead vocals until he retired in 1980) continued to tour with newer members, including Rod Gerrard (formerly with Wayne Fontana & the Mindbenders and Salford Jets).

Hopwood and Leckenby eventually started a music company, Pluto Music, which is still in business as of 2011 working primarily on commercial and animation soundtracks. Hopwood has since become a composer of scores for film and television. Green has become a manager of sound systems for concert venues along London's South Bank.[12]

Leckenby died of non-Hodgkin lymphoma in 1994, leaving Whitwam as the only original member of the band. The band's current lineup consists of Whitwam, lead singer and bassist Geoff Foot, guitarist Paul Cornwell, and keyboardist Tony Hancox. Noone continues to play solo shows billed as "Herman's Hermits starring Peter Noone". Legal disputes between Whitwam and Noone have forced the former to rename the band "Herman's Hermits starring Barry Whitwam" when they tour in North America, but they remain billed as "Herman's Hermits" worldwide.[13]

Original members are listed in bold.

This article uses material from the article Herman's Hermits from the free encyclopedia Wikipedia and it is licensed under the GNU Free Documentation License.