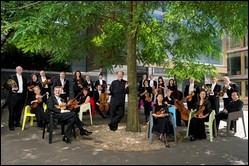 The Zurich Chamber Orchestra (Zürcher Kammerorchester; ZKO, German abbreviation) is a Swiss chamber orchestra based in Zurich. The ZKO's principal concert venue in Zurich is the Tonhalle. The ZKO also performs in Zurich at the Schauspielhaus Zürich, the ZKO-Haus in the Seefeld quarter of the city, and such churches as the Fraumünster and the Kirche St. Peter. The ZKO presents approximately 40 performances in Zurich each year, in addition to approximately 40 children's concerts and performances elsewhere in Switzerland and abroad. In the 2016-2017, season the total number of concerts was151, a record for the ZKO.

Edmond de Stoutz founded the ZKO in the aftermath of World War II, and led its first concerts in 1945. He served as artistic leader and principal conductor of the ZKO until 1996.

He commissioned many works, including Peter Mieg's Concerto for oboe and orchestra (1957) and Frank Martin's Polyptyque for violin and two small string orchestras (1973).

In 1996, Howard Griffiths assumed the post of artistic director and served until 2006. Muhai Tang was the ZKO's third principal conductor and artistic director, from 2006 through 2011. Sir Roger Norrington was its fourth principal conductor, starting with the 2011-2012 season. [1] He concluded his ZKO tenure after the 2015-2016 season and now has the title of honorary conductor with the ZKO. Daniel Hope became its music director in the 2016-2017 season.[2] The ZKO enjoys a particular collaboration in baroque music with Maurice Steger.

In the USA, the ZKO first appeared in New York City in 1955.[3] It was the first Swiss orchestra ever to go on a tour through the USA. The ZKO made its Boston debut in 1967 for the Peabody Mason Concert series.[4] Since then the ZKO visited the US several times, latest in March 2018.

The ZKO has made commercial recordings for such labels as Omega, Novalis, Claves, Teldec, CPO, and Sony. In 2017 two of the orchestra's CD-releases were honoured with an Echo Classic Award in the Classics Without Borders category: For Seasons with Daniel Hope as soloist[5] and ÜberBach with Sebastian Knauer on the piano.[6]

This article uses material from the article Zurich Chamber Orchestra from the free encyclopedia Wikipedia and it is licensed under the GNU Free Documentation License.