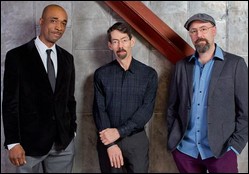 Fred Hersch (born October 21, 1955) is an American jazz pianist and educator. He has performed solo and led his own groups, including the Pocket Orchestra consisting of piano, trumpet, voice, and percussion. He was the first person to play weeklong engagements as a solo pianist at the Village Vanguard in New York City. He has recorded more than 70 of his jazz compositions. Hersch has been nominated for several Grammy Awards, and, as of December 2014, had been on the Jazz Studies faculty of the New England Conservatory since 1980 (with breaks).[1]

Hersch was born in Cincinnati, Ohio. He began playing the piano at the age of four and started composing music by eight. He won national piano competitions starting at the age of ten.

Hersch first became interested in jazz while at Grinnell College in Iowa. He dropped out of school and started playing jazz in Cincinnati. He continued his studies at the New England Conservatory, attracting attention from the press – "a fine showcase for Fred Hersch" – in a college recital.[2] On graduation, he became a jazz piano instructor at the college.[3]

One of Fred Hersch's earliest professional engagements was with Art Farmer in Los Angeles in 1978. Jazz critic Leonard Feather wrote that he "showed his ability as an accompanist and soloist at the out-of-tune piano".[4] He played with Farmer again in 1981.[5] In 1982, the album A Work of Art (Art Farmer Quartet, Concord Jazz CJ-179), was released, with Hersch on piano. It included two original compositions by Hersch. Leonard Feather gave it 3½ stars.[6]

In 1980, the Fred Hersch Trio played at B. Dalton Bookseller, one of many fringe events that were an offshoot of the Newport Jazz Festival.[7]

In 1981, he and his trio played for singer Chris Connor, who was making a comeback after completing a recovery program for alcoholism.[8]

He played at the Kool Jazz Festival in 1981,[9] and with Joe Henderson in the New Jazz at the Public series in the same year.[10]

In 1983, Hersch played a duo session with bassist Ratso Harris at the Knickerbocker Saloon, New York. The New York Times wrote, "Mr. Hersch is a romantic. He is openly involved in what he is playing and projects this involvement with body English and facial expressions that subtly underline the sense of his music. His lines often become gently billowing waves of sound, and he rises and falls, tenses and relaxes along with them."[11]

He was the pianist for the Eddie Daniels quartet in 1987 and appeared on his album, To Bird with Love.[21]

In 1988, Hersch played in Somerville, Massachusetts with his quintet at the Willow Jazz Club. The Boston Globe described him as "an elegant, highly melodic player."[22]

In 1989, Hersch played with Janis Siegel of The Manhattan Transfer and they recorded together in a studio set up in his home.[23]

In 2006, Palmetto Records released the solo CD Fred Hersch in Amsterdam: Live at the Bimhuis,[24] and released his eighth solo disc, Fred Hersch Plays Jobim, in 2009.[25]

Hersch's career as a performer has been enhanced by his composing activities, which are an important part of nearly all of his concerts and recordings. He has received commissions from the Gilmore Keyboard Festival, the Doris Duke Foundation, the Miller Theatre at Columbia University, the Gramercy Trio and the Brooklyn Youth Chorus. A disc of his through-composed works, Fred Hersch: Concert Music 2001-2006, was released by Naxos Records.

A number of Hersch's compositions have been transcribed by music publisher Edition Peters. These include "Valentine", Three Character Studies, Saloon Songs, and 24 Variations on a Bach Chorale.[26]

Hersch was awarded a 2003 Guggenheim Memorial Fellowship for composition. In the same year, he created Leaves of Grass (Palmetto Records), a large-scale setting of Walt Whitman's poetry for two voices (Kurt Elling and Kate McGarry) and an instrumental octet; the work was presented in March 2005 at Zankel Hall at Carnegie Hall as part of a six-city U.S. tour.[27]

In 1993 Hersch announced publicly that he was gay and that he had been treated for HIV since 1984. He fell into a coma in 2008 for two months.[28][29] When he regained consciousness, he had lost all muscular function as a result of his long inactivity and could not play the piano. After rehabilitation, he was able to play again.[29] In 2011 he performed My Coma Dreams, a stage show written and directed by Herschel Garfein about the contrast between dreams and reality.[30]

He received Grammy nominations in 2011 for Alone at the Vanguard (Best Jazz Album and Best Improvised Jazz Solo). He has received other Grammy nominations for Best Instrumental Composition, and two for Best Jazz Instrumental Performance. In 2011 Hersch was voted Jazz Pianist of the Year by the Jazz Journalists Association. His two-CD trio album, Alive at the Vanguard, was awarded the 2012 Grand Prix du Disque by the Académie Charles Cros in France and was named one of the Best CDs of 2012 by Downbeat.

In 2013, Hersch and guitarist Julian Lage were nominated for "Song without Words #4: Duet" (Best Improvised Jazz Solo) from Free Flying, a duo album.[31][32]

In December 2014, Hersch was nominated for the 57th Grammy Awards. In the "Best Jazz Instrumental Album" category, his trio was nominated for Floating.[33] The track "You & the Night & the Music", from Floating, was nominated for "Best Improvised Jazz Solo."[34] National Public Radio named floating No. 11 on its list of 50 Favorite Albums of 2014.[35]

Hersch has been awarded a Rockefeller Fellowship, grants from Chamber Music America, the National Endowment for the Arts and Meet the Composer, and seven composition residencies at the MacDowell Colony. Hersch has been a guest on a variety of radio and television programs.

Hersch has taught at The New School and Manhattan School of Music, and conducted a Professional Training Workshop for Young Musicians at The Weill Institute at Carnegie Hall in 2008.

Hersch has been a spokesman and fund-raiser for AIDS services and education agencies since 1993. Hersch has produced and performed on four benefit recordings and in numerous concerts for charities including Classical Action: Performing Arts Against AIDS and Broadway Cares/Equity Fights AIDS which had raised over $250,000 as of June, 2013. In April, 2016 he played a benefit concert for Buddhist Global Relief.[39] He has also been the keynote speaker and performer at international medical conferences in the U.S. and Europe.

Hersch's influence has been widely felt on a new generation of jazz pianists, from former Hersch students including Brad Mehldau and Ethan Iverson of the Bad Plus, to his contemporary Jason Moran, who said: "Fred at the piano is like LeBron James on the basketball court. He's perfection."

Downbeat magazine described Hersch as "one of the small handful of brilliant musicians of his generation."[40] The New York Times described him as "singular among the trailblazers of their art, a largely unsung innovator of this borderless, individualistic jazz – a jazz for the 21st century."[41]

This article uses material from the article Fred Hersch from the free encyclopedia Wikipedia and it is licensed under the GNU Free Documentation License.