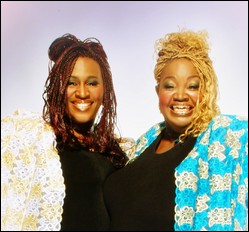 The Weather Girls, also known as Two Tons o' Fun (especially during the early portion of their career), was composed of singers Izora Armstead and Martha Wash. The duo charted several dance hits over the course of its career, with its peak in popularity having occurred in 1982, when the group released the hit song "It's Raining Men."

The rights to the name "The Weather Girls" are currently held by Dynelle Rhodes, the daughter of founding Weather Girl, Izora Armstead. Rhodes does not currently have a singing partner.

The original Two Tons were Martha Wash and Izora Armstead. Though the mainstream pop market considers the team a one-hit wonder for "It's Raining Men" (though the song did not make the Top 40 in the US, peaking at #46 on the Billboard Hot 100), they recorded three songs which peaked at #2 on the Billboard Hot Dance Club Play chart under the "Two Tons o' Fun" name: "Earth Can Be Just Like Heaven" (1980); "Just Us" (1980 and also made #29 on the US R&B chart); and the Hi-NRG song "I Got the Feeling" in 1981. They were brought together by Sylvester as his backing group (from 1977 to 1981), who also gave them the name 'Two Tons O' Fun.' They also backed Aretha Franklin (on "Freeway of Love"), and Bob Seger (1986). They are best known for their 1982 #1 club and pop hit, "It's Raining Men", the recording of which music producer Paul Jabara supervised and from which the name "The Weather Girls" was derived. After the success of "It's Raining Men", other hits with the original line-up (which adopted the Weather Girls moniker permanently after the hit) included "Dear Santa (Bring Me a Man this Christmas)", for which, as with "It's Raining Men", an accompanying music video was made, and "No One Can Love You More Than Me." The group disbanded in 1985, while Wash moved on to a solo career, one that continues into the present day. (Wash also sang lead on the song "Everybody, Everybody" for the group Black Box, and recorded with C+C Music Factory at the peak of that band's popularity in the early 1990s.)

In the 1990s, Izora Armstead moved to Germany, where she and her daughter Dynelle Rhodes re-formed the group for touring in Europe and, in 2002, they joined the "Disco Brothers" for a participation in the German National Final for the Eurovision Song Contest, with their song "Get Up". In the end, the group only managed a 13th place out of 15.

Armstead died in 2004. The Weather Girls (now composed of Rhodes and Ingrid Arthur) released a new album, Totally Wild, in late 2005. It scored an underground club hit with "Wild Thang." Like the original Weather Girls, the duo has proven successful with its gay male core audience.

In 2008, the Weather Girls were listed as featured artists on the song, "Break You" by Ralph Falcon of the bands Murk and Funky Green Dogs. This song spent one week at No. 1 on the American dance chart in May 2008.[1]

Other singles by the Weather Girls

This article uses material from the article The Weather Girls from the free encyclopedia Wikipedia and it is licensed under the GNU Free Documentation License.

Emile Jaques-Dalcroze 4.Satz Allegro con brio aus der Tanzsuite für Orchester
Update Required To play the media you will need to either update your browser to a recent version or update your Flash plugin.