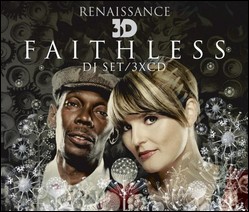 Faithless was a British electronica band consisting of Maxi Jazz, Sister Bliss and Rollo.[1] The group is best known for their dance songs ("Insomnia", "God Is a DJ" and "We Come 1"). Faithless recorded six albums. During their career they sold over 15 million records worldwide.[2] The band announced it would split up after their Passing The Baton dates at Brixton Academy on 7 and 8 April 2011, [3] however Maxi Jazz and Sister Bliss still occasionally perform as a "Faithless DJ & Live PA" collaboration.

The band was formed in early 1995, and their debut single "Salva Mea (Save Me)" was released in July that year.[1] Jazz acted as a vocalist, whilst Bliss constructed most of the music herself electronically, but also played the piano, violin, saxophone and bass guitar. Rollo heads and produces the band. Lead female vocals for many of their songs are performed by Pauline Taylor, who also performed lead vocals for singles by Rollo released under his monikers Rollo Goes Mystic and Rollo Goes Spiritual.

The albums are Reverence (which reached number 26), Sunday 8PM (reaching number 10), Outrospective (at number 4) and No Roots (which debuted at number 1); they were released between 1996 and 2004, with a greatest hits compilation album out in 2005.[1][4] In light of their dance roots, each of the four studio albums has been followed with a subsequent bonus disc of remixes. Their fifth album, To All New Arrivals, was released in 2006. Album number six, The Dance, was released on 16 May 2010, after a four year recording break for the band.

The band also collectively indulge in mixtapes of other musicians' work, either mixed by the group or merely selected by them. This includes the long running Back to Mine sessions as well as The Bedroom Sessions and more recently the Renaissance 3D music project, in conjunction with the Renaissance nightclub.

On 29 September 2006, the first single "Bombs" from their album To All New Arrivals made its debut on BBC Radio 1's Pete Tong show. The album was released on 27 November 2006. "Bombs" generated moderate controversy with its music video, as demonstrated by MTV's refusal to air it.[5] The video featured interchanged clips of war scenes and daily life. As said by the director of the music video Howard Greenhalgh, "War infects all our lives; recently it feels that this has increasingly become 'our way of life'".

In October 2007 they played alongside Talib Kweli and Ozomatli and one of China's earliest music festivals, Yue, organised by Split Works.[6]

On 7 August 2009, a dub mix of the track "Sun to Me" from their latest studio album, The Dance, made its debut on BBC Radio 1's Pete Tong show. "Sun to Me" has been given as a free download to all users that have registered on the new Faithless site, or subscribed to their newsletter. The track has been released on the band's Myspace page as well. On 12 February 2010, the first official single from the next Faithless album was played on Pete Tong's show. The single, "Not Going Home", was released on 4 May 2010, whilst the latest album The Dance, was issued on 16 May 2010. The album is available only in Tesco (3 month exclusive contract) and via iTunes in the UK. Since 2009, their track "Drifting Away" has been the theme tune for the BBC Television's Chelsea Flower Show coverage.[7]

In 2010, they returned to the Glastonbury Festival after eight years, playing on the Pyramid Stage. They performed many of their most popular songs including "Insomnia", "God is a DJ", and "We Come 1".

On 16 March 2011, Maxi Jazz announced on his website that Faithless would cease to be, commenting "But, like when writing a song, you always just know when its finished this is and was the Thank YOU And Goodbye tour."[8]

They played two nights at Brixton Academy on 7 and 8 April 2011. The latter date would be the last ever Faithless show and was transmitted live via satellite to cinemas across Europe. However, the Faithless Sound System (a stripped down version of Faithless consisting of Maxi Jazz, Sister Bliss and Sudha Kheterpal) gave final shows on 22 July 2011 at the Tomorrowland festival in Belgium, at the Waterford Music Fest in Ireland on 30 July[9] and in Split at the Riva Discothèque on 12 August.[10] Faithless performed in Dubai on 31 December 2012.

Despite the announcement of their retirement, they currently - albeit only occasionally - continue to perform in the form of the stripped-down Faithless Sound System or via live PA and DJ sets incorporating Maxi Jazz and Sister Bliss only. Their first appearance in the UK since 2011 took place at the new Brixton Electric nightclub on 31 May 2013. A further one-off appearance in the same format and the same venue is scheduled to take place on 6 June 2014.

As well as their own studio albums, all three members actively engage in other people's work as solo figures. Sister Bliss is a prominent dance DJ and has for a long time toured the circuit on her own, remixed others' albums and even appeared in music videos, such as Paul Oakenfold's "Weekend". Maxi Jazz brought out an album before the formation of Faithless and also worked on pirate radio. He also collaborated with Faithless founding member Jamie Catto on his new project 1 Giant Leap guesting on a song with Robbie Williams. Finally, Rollo founded the label Cheeky Records and has produced the music of other artists, most notably his sister Dido's albums, as well as using various monikers to create popular dance music under the names Rollo Goes (Camping, Mystic and Spiritual), Felix, Our Tribe (with Rob Dougan), and Dusted.

This article uses material from the article Faithless from the free encyclopedia Wikipedia and it is licensed under the GNU Free Documentation License.