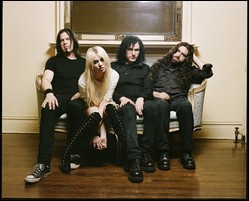 The Pretty Reckless is an rock band from New York City that was formed and is fronted by American actress and model Taylor Momsen. Other members include Ben Phillips (guitar), Mark Damon (bass) and Jamie Perkins (drums). The band was originally going to be called "The Reckless", but was changed to The Pretty Reckless due to trademark problems.[1]

Their debut album, Light Me Up, was released on August 30, 2010 in the UK. They released their first single "Make Me Wanna Die" on May 13, 2010. The single peaked at #1 on the UK Rock Chart and was received with positive reviews.

2008present: The Pretty Reckless and Light Me Up

Momsen met with producer Khandwala and songwriter Phillips in October 2008. She formed the band in 2009 with John Secolo, Matt Chiarell and Nick Carbone. They recorded some demos in early 2009 and they opened for The Veronicas on their North American tour. On June 4, 2009, Taylor fired her band members because they didn't fit with her music style and formed a new band. With the new band, Momsen recorded new songs with a darker style and the demos recorded with the old band, "Blender" and "He Loves You," were left behind.

At present, Taylor Momsen is the singer, with Ben Phillips on guitar, Mark Damon on bass, and Jamie Perkins on drums.

Momsen stated in an interview with OK! Magazine that the band signed with Interscope Records and would be releasing their debut album in 2010. In another interview, Momsen briefly discussed the sound of the band, saying it would be "not what people are going to expect" and will feature a dark and heavy sound but would have "lighter, fun stuff as well." In an interview with MTV, Momsen revealed the influences on the band include The Beatles and Oasis, along with grunge band Nirvana. She also stated that her personal influences include Kurt Cobain and Joan Jett.[2] After the band announced they had signed to Interscope Records, two new recordings of demo songs ("He Loves You" and "Zombie") were posted on their MySpace.

On December 30, 2009, the band released a new promo song entitled "Make Me Wanna Die". The song was uploaded for free download to fans on their Interscope Records website for a limited amount of time.[3] The band launched "Make Me Wanna Die" on the soundtrack to the 2010 film Kick-Ass. The song was the band's first single, and was released on May 17, 2010, with the debut album set to be released in August.[4] On April 9, 2010, they performed during the "Vans Warped Tour 2010 Kick-Off Party" and performed on the Bamboozle Music Festival on May 1, 2010.[1] They will be playing the entire Warped Tour 2010.[5]

The first EP for their album was released on June 22, 2010, with mixed reactions. Most critics praised the lyrics and production, however Rolling Stone Magazine classified the sound as "generic".[6] It contained four songs of their debut album: "Make Me Wanna Die", "Zombie", "My Medicine", and "Goin' Down". The first single "Make Me Wanna Die" was released on May 17, 2010 and was #1 on the UK Rock Chart for six weeks. A viral video was released to promote the single, and the band announced that the official version would be released soon. The full record is due to be released on August 31, 2010.

The band announced the album title as Light Me Up through MySpace. They also confirmed several song names, including "You", "Miss Nothing", "Just Tonight", "Since You're Gone" and the title-track "Light Me Up". The album is produced by Khandwala and entirely written by Momsen and Phillips. The album will be released on August 30, 2010 in UK and August 31, 2010 worldwide.

The song "Miss Nothing" will be the second single, and it is listed on Digital Spy to be released on August 9, 2010. It was aired exclusively on the British radio station, BBC Radio 1, on July 22, 2010. The band introduced it as their next UK single after a show on the Vans Warped Tour.[7] A video for "Miss Nothing" was released on July 20 on VEVO.

They will being opening up V Festival, a major UK music festival. Momsen revealed the official album cover on July 27, 2010, via her Twitter account. In August 2010, the band performed a medley of "Islands" by the xx and "Love the Way You Lie" by Eminem for BBC's Live Lounge series.[8]

The band performed on August 25, 2010 on Late Night With David Letterman.

This article uses material from the article The Pretty Reckless from the free encyclopedia Wikipedia and it is licensed under the GNU Free Documentation License.