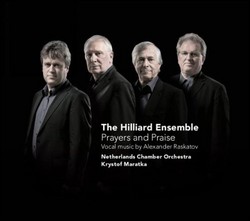 The Hilliard Ensemble is a British male vocal quartet originally devoted to the performance of early music. Founded in 1974,[1] the group is named after the Elizabethan miniaturist painter Nicholas Hilliard.

Although most of its work focuses on music of the Medieval and Renaissance periods, the Hilliard Ensemble also performs contemporary music, working frequently with the Estonian composer Arvo Pärt and including in its concerts works by John Cage, Gavin Bryars, Giya Kancheli, and Heinz Holliger.

The group was originally founded by Paul Hillier, Errol Girdlestone, Paul Elliott, and David James, although the membership was flexible until Hillier left in the late 1980s. Since 1990 the core members have been David James, Rogers Covey-Crump, John Potter, and Gordon Jones, with one change: in 1998 John Potter was replaced by Steven Harrold.

The Hilliard Ensemble has recorded extensively for the ECM label. In 1994, when popular interest in Gregorian chant was at its height, the ensemble released the CD Officium, an unprecedented collaboration with the Norwegian saxophonist Jan Garbarek. The disc became one of ECM's biggest-selling releases, reaching the pop charts in several European countries and receiving five gold discs in sales. Officium's sequel, the 2-CD set Mnemosyne, followed in 1999. The third album, Officium Novum, was released in 2010.[2][3]

Their recordings have also been included in Craig Wright's Listening to Music textbook for music students and music appreciation.

In 2005 the ensemble took part in the Rheingau Musik Festival's composer's portrait of Arvo Pärt, together with the Rostock Motet Choir.[4]

In 2008, The Hilliard Ensemble premiered Heiner Goebbels' avant-garde staged concert I went to the house but did not enter at the 2008 Edinburgh International Festival, repeated at the Berliner Festspiele.[5]

On 15 November 2010 the group appeared at Church of St. Paul the Apostle in New York to perform Kjartan Sveinsson's Cage a Swallow Cant You but You Cant Swallow a Cage.[7]

The Hilliard Ensemble's final concert will be on 20 December 2014 in London, after which they will retire.[8]

This article uses material from the article Hilliard Ensemble from the free encyclopedia Wikipedia and it is licensed under the GNU Free Documentation License.

Johann Friedrich Fasch Andante und Allegro aus der Sonata G-Dur
Update Required To play the media you will need to either update your browser to a recent version or update your Flash plugin.