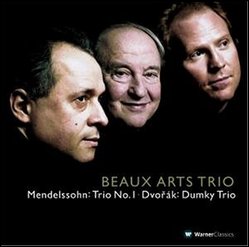 The Beaux Arts Trio was a noted piano trio, celebrated for their vivacity, emotional depth and wide-ranging repertoire. They made their debut on 13 July 1955, at the Berkshire Music Festival, Lenox, Massachusetts, United States, known today as the Tanglewood Music Center. Their final American concert was held at Tanglewood on 21 August 2008. It was webcast live and archived on NPR Music.[1] Their final concert was in Lucerne, Switzerland on 6 September 2008.

The Beaux Arts Trio recorded the entire standard piano trio repertoire. In 2005, the trio celebrated its 50th anniversary with two special CD issues, one featuring their most popular releases through their long years of recording (released by Philips Records), and the other an anniversary collection of new music (released by Warner Records). Throughout its existence, the trio was held together by the founding member, pianist Menahem Pressler. The original members of the trio when it was founded in 1955 were:[2]

The violin and cello members changed on a number of occasions, with later members including:

This article uses material from the article Beaux Arts Trio from the free encyclopedia Wikipedia and it is licensed under the GNU Free Documentation License.

Leopold Antonin Kozeluch 1. Satz aus der Sinfonie g-moll
Update Required To play the media you will need to either update your browser to a recent version or update your Flash plugin.