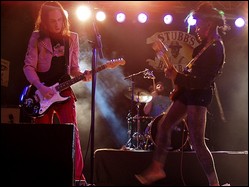 The band formed in 2003 when guitarist Smith and singer Shoniwa of the band Sonarfly began playing and writing together, along with drummer Morrison (formerly of Living With Eating Disorders, Willis, Six Toes, Jaywalk Buzz and others). The three had previously attended the BRIT School for Performing Arts & Technology in Croydon together [1]. They quickly formed a reputation for being one of the rowdiest live acts in London.[2]

Early feedback about the band was largely positive. Entertainment Weekly placed the band on its November 2005 list of "Six Indie Brit Bands on the Cusp," and said the band "sound[s] like high-drama, heavily syncopated swagger-and-sway rock, spearheaded by incandescent frontwoman Shingai Shoniwa."[3] In a March 2006 article on UK bands, USA Today said, "The incendiary Shingai Shoniwa leads this London blues-punk band, known for its feral and explosive live show."[4]

Noisettes along with Paul Weller, Graham Coxon, The Smiths's Andy Rourke, and members of New Young Pony Club and Supergrass performed an exclusive rendition of a specially created track, alongside their own material, to raise money for the homelessness charity Crisis Consequences. The event was hosted at Camden's Roundhouse on 2 March 2008, and organized by Pearl Lowe.[5] Noisettes also performed at the SXSW showcasing three of their new songs from their new album (which is said to be released sometime this year. The were part of the NME/Transgressive party at the Wave venue on 13 March 2008. The set including their hit songs Scratch Your Name and Sister Rosetta, with three new songs: Beat Of My Heart, IWE, and Atticus.[6] Noisettes performed at two day music festival Camden Crawl on 18 April 2008.[7]

In January 2009 the song Don't Upset The Rhythm appeared on the advert for the Mazda 2. The song was the second single from their second album Wild Young Hearts. The album was released on 20 April 2009.

Noisettes have toured Europe and the United States extensively, with the likes of TV on the Radio, Tom Vek, Babyshambles, Bloc Party and the Mystery Jets. They supported Muse on a UK and European arena tour in November and December 2006, and toured the UK to promote the release of their debut album What's the Time Mr. Wolf? in February 2007. Noisettes also appeared at the Coachella festival on 27 April 2007 and performed at the Reading and Leeds Festivals on the NME/Radio 1 Stage in August. Noisettes also made their US television debut on The Late Late Show with Craig Ferguson on 2 April 2007. Shingai Shoniwa has provided backing vocals for many bands including Guillemots songs Made Up Love Song #43 and Over the Stairs. Noisettes song, Scratch Your Name was featured on the finale episode of The Sopranos in 2007. As well, another Noisettes song was in a Bionic Woman episode.

Noisettes were set to start their first North American headlining tour but cancelled due to over-touring.[8] They still performed at the Detour Music Festival on 6 October 2007, which included a new track titled Motion in the Ocean.

The band are set to undertake a UK tour prior to the release of Wild Young Hearts, and have taken the unusual step of using their Myspace blog to appeal for local bands to appear as support acts on this tour.[9] These included Paul Dixon in Manchester, This Beautiful thief in Birmingham, Emily Breeze in Bristol, Young Fathers, Jack Butcher in Glasgow and I Am A Cult Hero in Dublin. [10]

On 28 June 2009, Noisettes played the John Peel Stage at Glastonbury Festival in Somerset, England as well as an acoustic version of Never Forget You backstage for the BBC. Noisettes will tour with Lady GaGa as main support during the European leg of her Fame Ball Tour in July 2009.

On 5 July 2009 Noisettes performed a set on the main stage at Wireless 2009 in London's Hyde Park.

On 17 July 2009 Noisettes played Never Forget You on The Jonathan Ross Show on BBC1.

On 11 August 2009 Noisettes performed Never Forget You on The Wendy Williams Show [11].

On 24 September 2009, Noisettes played "Don't Upset the Rhythm" on The Ellen Show.

This article uses material from the article Noisettes from the free encyclopedia Wikipedia and it is licensed under the GNU Free Documentation License.