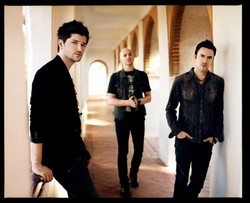 The Script are an Irish pop band formed in 2007 in Dublin, Ireland.[4][5] It consists of lead vocalist and keyboardist Daniel O'Donoghue, lead guitarist Mark Sheehan, and drummer Glen Power. The band moved to London after signing to Sony Label Group imprint Phonogenic and released its eponymous debut album of the same name, in August 2008, preceded by the successful singles "The Man Who Can't Be Moved" and "Breakeven". The album peaked at number one in both Ireland and the UK.[6] Their next three albums, Science & Faith (2010), #3 (2012) and No Sound Without Silence (2014), all topped the album charts in Ireland and the UK, while Science & Faith reached number three in the US.[6][7] Hit singles from the albums include "For the First Time", "Nothing", "Hall of Fame" and "Superheroes". The band's fifth studio album, Freedom Child, was released on September 1, 2017 and features the UK Top 20 single "Rain".

The Script's music has been featured in television programmes such as 90210, Ghost Whisperer, The Hills, Waterloo Road, EastEnders, Made in Chelsea and The Vampire Diaries. Frontman Danny O'Donoghue was also a coach on The Voice UK for seasons 1 and 2, before leaving the show in order to focus more on the band.[8][9] The band has won three Meteor Ireland Music Awards and two World Music Awards and have received two Brit Award nominations.

Danny O'Donoghue and Mark Sheehan have been best friends since they were 12 growing up in Dublin.[10][11] They were formerly part of a boy band called Mytown, formed in 1996. Striking up a songwriting and production partnership, they were invited to Canada to collaborate with some of their heroes, including Dallas Austin, Montell Jordan and Teddy Riley.[12] They were in the US for a few years and got a record deal until the company split and dropped them.

They stayed in Los Angeles and worked there as producers, writing and producing songs for performers including Britney Spears, Boyz II Men and TLC,[11] but later moved back to Dublin, where they recruited drummer Glen Power for their new band the Script. Power learned to play drums when he was just eight and he had been playing sessions from the age of 15, using the money to work on a solo project in his home, but that went on hold when his collaboration with Sheehan and O'Donoghue produced three songs in one week. The band signed to Phonogenic in 2005, and released an EP on Last.FM. The band's influences include Snow Patrol, U2, Coldplay, the Police, the Neptunes, Timbaland, and Van Morrison.[12]

The Script's eponymous debut album was released on 8 August 2008.[13] The album debuted at the number one spot on the UK's album charts.[14]

The Script performed "We Cry" for the first time on BalconyTV in Dublin on 13 September 2007.[15] The band claimed that BalconyTV was the "first TV they ever did" and credited Michael Hunter as the "push we needed to propel us" when they won Best Band at the DanishTV Music Video Awards 2009 in the Pepper Club Dublin on 20 June 2008. At the awards the band said the award was their "first ever".[16] The Script released their debut single "We Cry" on 25 April 2008. "We Cry" received "Single of the Day" on RTÉ 2FM, Today FM and by Jo Whiley on BBC Radio 1, where many radio presenters heavily supported the band.[17] The single peaked at number 15 on the UK Singles Chart,[18] giving the band their first top 20 single. The track also performed well on the Irish Singles Chart, peaking at number 9 and giving the band their first top ten single in their home country.[18] The Script also performed "We Cry" on one of the CW's TV series, 90210.

Their second single, "The Man Who Can't Be Moved", was released on 15 September 2008.[19] The single reached number 2 in Ireland, Denmark, and the UK.[20] The band released their debut album, The Script, on 11 August 2008. Following the success of "The Man Who Can't Be Moved", the album entered the UK Albums Chart at number one with sales of 20,240 copies where it stayed for 11 weeks. The album spent three weeks in the top ten and was the 18th best selling album in the UK of 2008. The album also entered the Irish Albums Chart at number one, holding the top spot for five weeks.[21] It had, as of January 2009, spent 2 weeks in the top 10. The Irish office of Sony BMG music presented the group with their first multi-platinum disc for over 600,000 sales of their debut album.[22]

The band's third single, "Breakeven", was released in Ireland and UK on 21 November 2008 and 29 December 2008 respectively. The single was an instant success on the Irish Singles Chart. After entering the chart at number 40, it spent one week before entering the top ten at number 10, giving the Script their third top ten single in Ireland. The single spent four weeks on the UK Singles Chart, peaking at number 21. The band's fourth single "Talk You Down" was released in March 2009.[23]

On 9 November the Script received an award at the World Music Awards for 'Best Selling Irish Act' of 2008 and on 19 February 2010, they won 'Best Live Performance' at the Meteor Ireland Music Awards. The band has confirmed that they plan to write a track for Leona Lewis's second album.[24] The Script supported Take That at their concert at Park on 13 June 2009. The band played at the Cheerio's Childline concert on the opening night of Dublin's 02. They played among big stars including Enrique Iglesias and Anastacia.

On 2 December 2009 the band's single "The Man Who Can't Be Moved" was featured as a remix on the Victoria's Secret Fashion Show during the Enchanted Forest segment.[29]

On 16 April 2010, their first U.S. single "Breakeven" was certified Platinum by the RIAA (the Recording Industry Association of America), selling over one million copies in the U.S. and has since peaked at No. 12 on the Billboard Hot 100 in the spring of 2010. The band performed a headline tour in the United States that kicked off in San Diego on 11 October 2010 at the House of Blues and ended on 7 November 2010 at the House of Blues in Boston, Massachusetts.[27] On 21 May 2010, they appeared live on NBC's Today Show as part of the show's outdoor Toyota Concert Series.

On 24 September, tickets for the Script's three nights at the O2 Dublin, two nights at the Odyssey, Belfast and two at the INEC, Killarney went on sale and sold out in less than 40 minutes, with over 60,000 tickets sold. On 1 October at 9:00am tickets for the Script arena tour in March 2011 went on sale. The tickets for all 12 arenas around the UK sold out in five days. They also announced that they would play a "Homecoming" concert at the Aviva Stadium in Dublin. This is part of the Science & Faith Tour and will be their biggest headline show to date.

The Script also took part in Children in Need 2010 and BRMB's live 2010 with acts such as the Saturdays, Mark Ronson and Mcfly. They were nominated for Best International Act at the 2011 Brit Awards and performed at: Pinkpop festival, V festival, Oxegen, Isle of Wight Festival, T in the park, Thetford Forest Show, iTunes Festival, Skanderborg Festival, Sudoeste Festival, Tennents ViTal. They also played to the biggest indoor crowd of 18,300 people at the Coca-Cola Dome in Johannesburg, South Africa on 24 June 2011. They later went on to play their official biggest crowd on 2 July 2011 in Dublin's Aviva Stadium, and performed to a sold-out crowd of 50,000 people. the Coronas and Tinie Tempah were support acts on the night.

The band's third album was titled #3. It was released in the UK on 10 September 2012 and in the United States on 9 October 2012.[34] "Hall of Fame" was the lead single, which debuted on radio on 23 July 2012. It was recorded in Los Angeles, Studio 3, and released on iTunes on 21 August 2012. The single features will.i.am, whom Danny works alongside on The Voice UK. The song became their most successful to date, being certified 5x Platinum in Australia, Platinum in Italy, 2x Platinum in New Zealand, 6x Platinum in Norway, 2x Platinum in Sweden and 2x Platinum in the US. The song also peaked at number 1 in the UK, Scotland, Ireland, Europe and Austria, and charted in over 30 countries. It is their highest charting single to date worldwide.

Other singles include "Six Degrees of Separation" and "If You Could See Me Now", a tribute to O'Donoghue’s father and Sheehan’s parents.[35] On 16 September 2012, the Script achieved their first UK number one for a period of two weeks with their single "Hall of Fame" in its second week after being released.[36]

On 5 October 2012, the Script kicked off the Major League Baseball Postseason by playing a free concert at the MLB Fan Cave in New York City.[37] The Script was nominated for Best International band at the 2013 BRIT Awards.[38] On 5 September 2012, the Script embarked on a headlining concert tour to promote the album, known as the #3 World Tour. The tour spanned over 11 months and included shows in Europe, North America, Asia, and Australia, ending in August 2013. The band also went on tour with OneRepublic for their Native Summer Tour to promote the album, during the summer of 2014.

The band's fourth studio album was titled No Sound Without Silence and the lead single from the album, "Superheroes", was released on 22 July 2014. The album has been described by O'Donoghue as a prequel to their debut album, with many of the songs being recorded on the road, after playing to sold out arenas. On the recording process, Danny O’Donoghue stated, "We’d come off stage and start recording straight away in a studio bus. Everything’s massive, everything’s larger than life on stage so when we hit the studio we wanted it to have that same impact." The album was released on 15 September 2014.[40][41]

The band's tour for this album. titled the "No Sound Without Silence Tour" occurred from 16 January 2015 through 18 September 2015. Throughout the tour, the band played a total of 56 total shows, and performed within Africa, Asia, Europe, Oceania, and North America.

Immediately after the tour, the band went on a nearly year-long unannounced hiatus. O'Donoghue didn't reveal this information until July 2017 and claimed that the hiatus occurred due to the band wanting some time off to "chill" after making four albums and going on five world tours.[42] Shortly after this announcement, it was revealed that another reason the band went on hiatus was due to O'Donoghue needing throat surgery.[43] The band returned to making new music in late 2016.

Beginning in early 2017, the band began teasing their new fifth album. They did so by releasing a couple of sneak peeks of songs from the album throughout the year. A sneak peek of a song titled "Divided States of America" was released on 5 January 2017.[44] A few months later, a sneak peek of a song titled "Written in the Scars" was released on 8 June 2017.[45] On 13 July 2017, the band officially announced the lead single off the album, "Rain". The song was released on 14 July 2017.[46] On 21 July 2017, it was announced that the new album would be titled Freedom Child. The album was put up for pre-order that same day. It contains 14 tracks and was released on 1 September 2017.[47]

Upon release, the album received mixed to negative reviews from critics upon release, but still managed top the charts in some countries. The album hit number one in Ireland, Scotland, and the United Kingdom, their third album to do so.

The song "Arms Open" was released as the second single off the album on 13 November 2017. A music video for the song was released on 1 December 2017.

The tour for the album, simply titled "Freedom Child Tour", has been occurring since September 2017 and is expected to wrap up in June 2018.

On 16 March 2018, the band released a live cover of the Aslan song "Crazy World" featuring Christy Dignam, the lead singer of Aslan.

On 17 March 2018, at a concert in Brussels, the band bought the whole audience a drink to celebrate Saint Patrick's Day. The 8,000 drinks were enough to set a new world record.

This article uses material from the article The Script from the free encyclopedia Wikipedia and it is licensed under the GNU Free Documentation License.