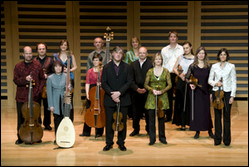 The Avison Ensemble is one of England's foremost exponents of classical music on period instruments. It is named after Charles Avison (1709-1770), the Newcastle-born composer, conductor and organist, the most important English concerto composer of the 18th Century.[1] Comprising some of Europe's leading musicians and soloists, the Avison Ensemble is directed by the celebrated period instrument violinist Pavlo Beznosiuk. The Ensemble varies in size depending on the repertoire being performed and is typically of chamber ensemble or concerto grosso size, expanding up to full symphony scale.

Formation of the Avison Ensemble

The Ensemble was formed in 1985 by Newcastle-born cellist and musical director Gordon Dixon after discovering a collection of 18th-century music at the back of a cupboard which was found to be a number of concertos by the long-neglected Avison.

Avison wrote more than eighty concertos, which drew the great musicians of the day to perform in Newcastle. He worked with figures such as the astronomer William Herschel who was leader of Avisons orchestra, the composer William Shield (his pupil from Whickham and to whom is owed the memory of Auld Lang Syne), the Newcastle glass enameller Ralph Beilby who was a bass player in Avisons orchestra, and the English wood engraver Thomas Bewick, who as a young lad engraved the concert tickets.

Despite having written over eighty string concertos, Avisons music had been rarely performed since his death, either on modern or period instruments. The Ensemble was formed with the aim of performing, recording and publicising Avisons works and to bring to public attention the many other neglected British composers of the baroque period, such as John Garth, Thomas Arne, and William Boyce, as well as performing the traditional repertoire.

Workbooks and the Avison Archive

As the author of An Essay on Musical Expression (1752), Avison was a pioneer in the field of musical aesthetics, and the dominant force in the musical life of Newcastle-upon-Tyne and the surrounding area.

Avisons two Workbooks are important new sources for the interpretation and performance of his works and these have recently been acquired by the Avison Ensemble. In 2001, with the assistance of the Heritage Lottery Fund, the first Avison workbook was acquired at Sothebys, London. Incredibly, less than a year later, a second workbook was discovered and acquired.

Both manuscripts contain many unpublished works by the composer and several of his contemporaries. Avison's second workbook contains autograph concerto transcriptions of Domenico Scarlatti's sonatas, scribal manuscripts of Avisons 12 Concerti Grossi Op.2, heavily revised and annotated in the composers hand, and transcriptions in full score of Francesco Geminiani's Concerti Grossi Op.7 as well as his unpublished arrangements of Geminianis Violin Sonatas Opp. 1 and 4.

Both workbooks have been fully restored by a team at Northumbria University and have been placed on loan to the Newcastle City Library, now named the Charles Avison Building, for safe-keeping and preservation. The workbooks are central to the Newcastle Local Collections [1] and feature as part of the Librarys recent Turning the Pages project.

The Avison Ensemble performs on period instruments in order to recreate as closely as possible the distinctive sound-world of the late 18th century.

Consisting of some of Europes leading baroque musicians and soloists the Ensemble is led by Pavlo Beznosiuk, one of the UKs leading period instrument virtuoso violinist and leader of the Academy of Ancient Music. Members of the Ensemble appear regularly in principal positions with the Academy of Ancient Music, Fretwork (music group), The Gabrielli Consort, Monteverdi Choir, Orchestre Révolutionnaire et Romantique, and the English Baroque Soloists, the Amsterdam Baroque Orchestra, English Concert, The King's Consort, and Les Arts Florissants.

The Ensemble has also performed under the conductors Benjamin Zander and Nicholas Kraemer, and with soloists such as the cellists Anner Bylsma, Jaap ter Linden, and Pieter Wispelwey, pianists Ronald Brautigam and Alexei Lubimov, and singers James Bowman, Robin Blaze and Catherine Bott.

In addition to numerous appearances in the other English regions most recently at St George's Church, Brandon Hill, Bristol - the Ensemble has also appeared at St John's, Smith Square, London, the Foundling Museum, London (in conjunction with the Handel House Museum), at Trinity College of Music in the Chapel of the Old Royal Naval College, Greenwich, as part of the Greenwich Early Music Festival, and at the Handel Festival, Halle, in Germany. The Ensemble has performed twice at St. James's Palace, London with the choir of Her Majesty the Queens Chapel Royal, and were the largest orchestra in the opening series at the new London concert hall, Kings Place, performing an all Beethoven programme on period instruments which included the Triple Concerto. In 2012 the Ensemble's activities included performances at St James's Church, Piccadilly and St. Nicholas Anglican Cathedral, and the Ensemble returned to Kings Place to present a two-day festival of Arcangelo Corelli's music.

For two years the Ensemble broadcast live concerts on BBC Radio 3 as part of their Live from the 18th century series. The Ensemble spearheaded the extensive programme of events in 2009 celebrating the 300th anniversary of Avisons birth.

The Avison Ensemble has recorded the complete works of Charles Avison on both the Naxos Records and Divine Art[2] labels, and amongst other recordings the six Cello Concertos by John Garth with Divine Art. Apart from the Avison/Scarlatti Concerti Grossi recording these have all been world premiere recordings. The Ensemble has recorded Handel's Concerti Grossi Opus 6 and Vivaldi's Violin Concerti Opus 8 including 'The Four Seasons' with Linn Records. In October 2012 the Ensemble released its recording of Arcangelo Corelli's Concerti Grossi Opus 6 on Linn Records, the first in its recording series of Corelli's complete works to commemorate the 300th anniversary in 2013 of the composer's death. The fourth and final recording in this series was released in April 2014. The Ensemble's recordings feature regularly on BBC Radio 3 and Classic FM (UK) playlists.

At the core of the Avison Ensembles activities is the strong programme of educational events including an established partnership developed with Gateshead Youth Orchestra and an annual project with North East schools. An international music partnership has been established with the New England Conservatory of Music, Boston, USA.

In August 2012 the Ensemble welcomed Benjamin Zander to present a series of music workshops in Newcastle for amateur and professional musicians and also listeners which explored music interpretation and performance.

The Ensemble also offers a training ground for young professional musicians to gain experience of period performance practice and styles, affording them the opportunity to work with outstanding directors and soloists.

The annual Avison Ensemble Young Musicians' Awards were set up in 2005 to encourage young musical talent across the North East region. The entrants to the Awards receive tuition and guidance, as well as important encouragement to continue their musical education. The winners of the three Grade categories and small ensemble category are presented with engraved glass trophies created by the North East glass artist Dominic Fonde which are inscribed with music from the Avison workbooks and are displayed in the winners' schools for a year.

This article uses material from the article Avison Ensemble from the free encyclopedia Wikipedia and it is licensed under the GNU Free Documentation License.