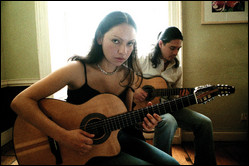 The musicians gained a reputation by playing in the pubs and bars of Dublin, Ireland, and despite their unusual style, gained a cult following. Reviewing one of their gigs, The Independent notes that "Rodrigo y Gabriela's secret is maybe quite simple. They are resourceful musicians, and are open-hearted, happy entertainers. That, very often, is what people want."[1] Both live a vegan lifestyle and support animal rights.[2] They regularly dismiss being classified in a particular genre of music, preferring to say they play a fusion of many influences.

The duo met in Mexico City while playing in a thrash metal band called "Tierra Ácida." Growing frustrated with the limited scope of the domestic music scene, they moved to Europe, where they were well received.

They took up residence in Dublin, Ireland, after hearing it was particularly welcoming to travelling musicians. Playing live gigs in various pubs and busking on Grafton Street and Temple Bar allowed them to practice their sound. They received their break when Damien Rice approached them to provide the support for the Irish music festival Oxegen. In 2005, they toured extensively in festivals around the United Kingdom and beyond.

The self-titled album, Rodrigo y Gabriela, entered the Irish Albums Chart at #1 beating Arctic Monkeys and Johnny Cash to the top spot.[3] It was released internationally on March 13, 2006, having been given an earlier Irish release. Rodrigo y Gabriela, which was produced by John Leckie, includes covers of Led Zeppelin's "Stairway to Heaven" and Metallica's "Orion". The duo list Metallica as being among their key influence, alongside other heavy metal bands such as Megadeth, Slayer, Testament and Overkill. The other tracks are original works inspired by the places they have been and the people they have met.

Live in Japan was released on October 20, 2008 (UK), and includes 14 tracks, and a bonus DVD containing five videos.[4] The Led Zeppelin cover can be found on the album Rhythms del Mundo Classics.

Their feature on MTV gave them a huge boost in popularity in the United States. This led to a feature on Nightmare Revisited, a tribute album to the music from Tim Burton's The Nightmare Before Christmas. The duo perform an instrumental version of "Oogie Boogie's Song."

They released a new album, 11:11, in September, 2009. Alex Skolnick of Testament guests on the album, as do Strunz & Farah. Upon the release of the new album, they received much mainstream American popularity and were the featured music on Monday Night Football on October 12, 2009, as they celebrated Latino Heritage Month.

Their song Santo Domingo was chosen as the Starbucks iTunes Pick of the Week for November 10, 2009.[5]

The duo was the musical guest on "The Late Late Show with Craig Ferguson" that aired on CBS-TV on October 28, 2009, and was re-run on December 29, 2009. They performed "Buster Voodoo." They performed on Jools Holland's Annual Hootenanny on December 31, 2009.[6]

In May 2010, Rodrigo y Gabriela performed in front of U.S. President Barack Obama.[7]

They headlined the West Holts stage on the Sunday night at Glastonbury 2010 [8] and played the King Tuts Tent at T In The Park on 10 July 2010.[9] They also had a spot on the main stage at Latitude festival that same July and they managed to draw in a huge crowd.

In 2010, Rodrigo y Gabriela contributed a live version of their song "Hora Zero" to the Enough Project and Downtown Records' Raise Hope for Congo compilation. Proceeds from the compilation fund efforts to make the protection and empowerment of Congos women a priority, as well as inspire individuals around the world to raise their voice for peace in Congo.

In September, 2010, the duo announced a hiatus from touring due to stress injuries caused by Gabriela's heavily percussive style of playing.[10] However, they did manage to play five sold-out nights at Shepherds Bush in London.

On January 20, 2011, Rodrigo y Gabriela entered the studio with Hans Zimmer to write and record sessions of the score from Pirates of the Caribbean: On Stranger Tides. [11] The soundtrack was released on May 17, 2011, three days before the film's general release.[12]

Rodrigo and Gabriela were featured in the 2011 Dreamworks film Puss in Boots, scored by Henry Jackman.

This article uses material from the article Rodrigo y Gabriela from the free encyclopedia Wikipedia and it is licensed under the GNU Free Documentation License.