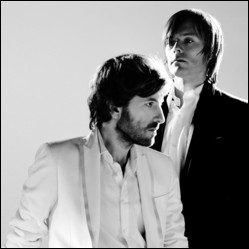 Air is a music duo from Versailles, France, consisting of Nicolas Godin and Jean-Benoît Dunckel.[1] From the name Air is derived the backronym Amour, Imagination, Rêve[2] which translates to Love, Imagination, Dream.

Genesis of the band

Nicolas Godin studied architecture at the École Nationale Supérieure d'Architecture de Versailles whereas Jean-Benoît Dunckel studied mathematics before forming a band in 1995. Before founding Air, Dunckel and Godin played together in the band Orange,[1] with others such as Alex Gopher, Xavier Jamaux, Éric LaCourt, and Étienne de Crécy. These musicians have subsequently contributed to remixes of tracks recorded by Air.

Air's music is often referred to as electronica; their form of electronic music was influenced by the synthesizer sounds of the 1970s such as Jean Michel Jarre, Vangelis and Francis Lai. Other influences include psychedelic rock pioneers Pink Floyd; film composer Ennio Morricone; krautrockers Tangerine Dream; early pioneers of the eurodance electronica subgenre Space ; Jean-Jacques Perrey (although there are some echoes of dance music styles in the production); French crooner Serge Gainsbourg; and soft rock duo The Carpenters.

Air use many of their studio instruments (like Moog synthesizers, the Korg MS-20, Wurlitzer and Vocoder) live on stage, where their ability to improvise is more clearly highlighted. The band performs the well-known tracks from the albums live as extended or altered versions. Air often works together, both in the studio and live on stage, with artists like Beth Hirsch (Moon Safari), Françoise Hardy ("Jeanne"), Jean-Jacques Perrey ("Cosmic Bird"), Gordon Tracks ("Playground Love" and "Easy Going Woman" - Gordon Tracks is a pseudonym of the French singer Thomas Mars from Phoenix), Beck (10 000 Hz Legend), on the 2004 tour with Dave Palmer and on the 2007 tour with drummer Earl Harvin, Vincent Taurelle and Steve Jones.

On September 18, 2006, Darkel, a solo album by Jean-Benoît Dunckel, was released.

Air have recorded a DJ mix album, Late Night Tales: Air, for Azuli Records' Late Night Tales series. The release was initially scheduled for October 2005, but was delayed several times. It finally was released, complete with a new sleeve design, on 11 September 2006.

Air have often collaborated with American film director Sofia Coppola. They composed the music to her debut film The Virgin Suicides. Air drummer and former Redd Kross member Brian Reitzell put together the soundtrack to Lost in Translation including one original contribution by Air titled "Alone In Kyoto". The soundtrack for Coppola's film Marie Antoinette features a track by Air.

City Reading (2003) started as an idea for a collaboration with contemporary Italian writer Alessandro Baricco, known for his unusual characterizations and lyrical, poetic style. Baricco contacted Air in summer 2002 with the idea to marry narration of texts from his book City with live original musical accompaniment. The performance premiered live in November 2002 at Rome's Teatro Valle, and was deemed such a success that both parties resolved to make a full studio recording that resulted in the album City Reading: Tre Storie Western.

Air wrote and played the music of the album 5:55 by French actress and singer Charlotte Gainsbourg, which was released in August 2006.

This article uses material from the article Air (band) from the free encyclopedia Wikipedia and it is licensed under the GNU Free Documentation License.