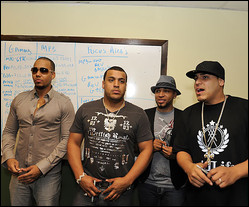 Aventura was a bachata music group from New York, United States. Aventura was formed in 1994 by Anthony "Romeo" Santos, Henry Santos, Lenny Santos, and Max Santos, three of whom are natives of The Bronx but families are from Dominican Republic and one born in the Dominican Republic.[1] Aventura made their big break in 1999, with the hopes of breaking bachata music out from its traditional base and fuse it with modern popular sounds like hip hop and R&B.[1] After their separation in 2011, Romeo Santos and Henry Santos embarked on respective solo careers while Lenny Santos and Max Santos joined Steve Styles from the Bachata group Xtreme to form Vena.[2] According to Romeo Santos, the group is "on pause to do individual projects," but will reunite in a couple of years.[3]

This article uses material from the article Aventura (band) from the free encyclopedia Wikipedia and it is licensed under the GNU Free Documentation License.

Domenico Scarlatti Sonate Es-Dur K 474
Update Required To play the media you will need to either update your browser to a recent version or update your Flash plugin.