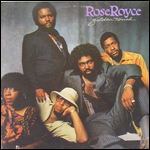 Rose Royce is an American soul and R&B group. They are best known for several hit singles during the 1970s including "Car Wash", "I Wanna Get Next to You", "I'm Going Down", "Wishing on a Star", and "Love Don't Live Here Anymore".

Whitfield, after a decade at Motown, wanted to start a company of his own. He took the T.C.U. octet under his wing and signed them to his label. The group, now called Magic Wand, began working with Yvonne Fair and became the studio and concert band for The Undisputed Truth. During a tour stop in Miami, Undisputed Truth leader Joe Harris noticed a singer named Gwen Dickey, then a member of a local group called The Jewels. Harris informed Whitfield of his discovery and Dickey was flown to Los Angeles to audition. In Dickey, Whitfield found the ingredient he felt was missing in Magic Wand: a charismatic female singer. He gave her the stage name Rose Norwalt. The original band lineup, now complete, prepared their debut album.

During this time Whitfield was contacted by film director Michael Schultz, fresh from the success of his first feature, Cooley High. Schultz offered Whitfield the opportunity to score his next picture, Car Wash. Whitfield would utilize the film to launch his new group, and began composing music based on script outlines. He and the band visited the film set, soaking up the atmosphere. This was one of the rare instances in Hollywood in which the music was composed concurrently with the picture instead of after the fact. In the spirit of the soundtrack, the band's name was changed one final time to 'Rose Royce'. The name not only referenced the movie's automotive theme, but it also placed Gwen "Rose" Dickey front and center. Further, it hinted at a touch of class the band strove to bring to 1970s soul-funk.[2]

The movie Car Wash and the soundtrack[3] were great successes, bringing the group national fame. Whitfield won the Best Music award at the Cannes Film Festival, and the album received the Grammy for Best Motion Picture Score Album of the Year. Released in late 1976, the soundtrack featured three Billboard R&B Top Ten singles: "Car Wash," "I Wanna Get Next to You," and "I'm Going Down." The first of these was also a number one single on the Billboard popular music charts, and "I Wanna Get Next to You" reached number ten.

The group's follow-up album, Rose Royce II: In Full Bloom, produced two Top Ten singles, "Do Your Dance" and "Ooh Boy". It also included "Wishing on a Star", which for Rose Royce was a top-10 hit only in the UK; it became notable elsewhere through its cover versions, including The Cover Girls' Top Ten single in 1992.

During 1978, they released their third album, entitled Rose Royce III: Strikes Again!, and it featured "I'm in Love (And I Love the Feeling)" and "Love Don't Live Here Anymore". Both singles entered the Billboard R&B Top Five. "Love Don't Live Here Anymore" was a #2 smash hit in the UK, and would later gain greater exposure through its cover versions, most notably by Madonna in 1984 and 1995.

The group followed with a series of modest successes that reached the charts, but never gained the status that their previous songs did. Dickey left the group in April 1980 and the band temporarily disbanded.[4] However, the remaining members regrouped, adjusted the line-up, and kept the group somewhat popular in the UK, where they remained a marquee attraction.

Rose Royce was featured in the TV One's seasonal series, Unsung during the spring of 2010. The story featured the successes and internal bickering of the group. Dickey, Copeland, Jobe, Moore and Garner were the only members of the band who gave interviews throughout the program. Dickey now performs as a solo artist in the UK, but mentioned during the interview that she would not mind performing with the group once again.

In addition, Jay-Z recorded his own song, also called "Wishing on a Star", for which Gwen Dickey re-recorded some of her original lyrics and was credited as a featured artist. And the song "Theme from S-Express" by S-Express uses a substantial portion of "Is It Love You're After" as a sample.

This article uses material from the article Rose Royce from the free encyclopedia Wikipedia and it is licensed under the GNU Free Documentation License.