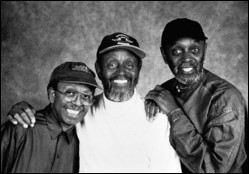 The Heath Brothers is an American jazz group, formed in 1975 by the brothers Jimmy (tenor saxophone), Percy (bass), and Albert "Tootie" Heath (drums); and pianist Stanley Cowell in Philadelphia, Pennsylvania. Tony Purrone (guitar) and Jimmy's son Mtume (percussion) joined the group later. Tootie left in 1978, and was replaced by Akira Tana for a short period before returning in 1982. They also added other sidemen for some of their recording dates.[1]

The group still exists with just two of the brothers, Jimmy and Tootie, and additional sidemen as needed. The DVD, Brotherly Jazz: The Heath Brothers, recorded in 2004, shortly before Percy Heath's death, was one of the last times the brothers played together, and chronicled the Heath Brothers' personal lives as well as socio-political issues many jazz musicians dealt with in the later 20th century, including jail, drugs, discrimination and segregation.

This article uses material from the article Heath Brothers from the free encyclopedia Wikipedia and it is licensed under the GNU Free Documentation License.

Ralph Vaughan Williams Prelude (Molto moderato)
Update Required To play the media you will need to either update your browser to a recent version or update your Flash plugin.