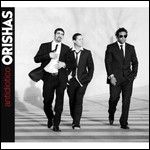 Orishas was a Cuban hip hop group from Havana, Cuba, founded in 1999. The group was first called "Amenaza",[1] "threat" or "menace" in Spanish, and appealed to the Cuban youth who were hungry for African-American culture consisting of hip hop and rap. Orishas delved into a realm of music that created a black identity to which some among the younger generations could relate. The group is based in France where they made a deal with a record company, although they visit Cuba frequently. In 1999 Fidel Castro threw a party for them and had a meeting with all the musicians.[2] It was the first time the Cuban government showed support for hip hop music. The group was and still is popular in Europe (especially France, Spain and Portugal) and Latin America. Yotuel Romero and Ruzzo Medina, who moved from Havana to Paris as part of an international studies program, joined Roldán González and Flaco-Pro to form the band in 1999. Their work is influenced by the hip hop movement as well as Cuban and other Latin rhythms. As of October 2009, they have produced a total of four studio albums and a greatest hits album; their latest album is Cosita Buena (released June 17, 2008). In 2009 they participated in the concert Paz Sin Fronteras II in Plaza de la Revolución, Havana, Cuba

The name "Orishas" refers to the set of deities worshipped in African-based religions in the Americas, like Santería in Cuba and Candomblé in Brazil, resulting from the relocation of Yoruba slaves. These orishas each represent a natural element (such as the ocean or leaves) and exhibit a human characteristic (such as motherhood or love).[3] The choice of this name for the hip hop group is a way of creating a direct link between this band and the African diaspora. This link is evident in the group's lyrics, for example those of "Nací Orichas" and "Canto Para Elewa Y Changó". The group's success is a testament to both the international appeal of the group itself as well as the global popularity of Cuban culture.[4] As of October 2009, the band consists of three members: Yotuel, Ruzzo and Roldán. Flaco-Pro left the group in 2002 before the release of its second studio album, Emigrante.[5] The band members live in distributed locations in Europe (Roldán in Paris, Ruzzo in Milan, and Yotuel in Madrid). In total, after producing three albums, Orishas has sold more than 750,000 copies of its albums in Europe and has received two Grammys. In 2007, they collaborated with Puerto Rican group Calle 13 on the song "Pa'l Norte" (from the album Residente o Visitante). The song won a Latin Grammy for Best Urban Song.

Los Orishas began as Cuban rap group Amenaza in the early 1990s. Led by Joel Pando, Amenaza became the first rap group to address the issue of racial identity in Cuban society.[6] In 1998, the members of Amenaza traveled to Paris to perform and accepted a record deal with a European label.[6] The transition to Europe was critical in their musical career, as many rap groups in Cuba lacked the resources for professional recordings. In fact, of the hundreds of rappers in Cuba, Orishas is the only group that has achieved international acclaim As of 2006.[6] Their first album, A Lo Cubano, was released in Spain in May 1999 under the Orishas moniker. In the summer of 1999, Orishas began a two-year tour across Europe and the United States, which brought them international notice. In December 2000, Orishas returned to Cuba to perform two concerts, attracting tens-of-thousands of young Cubans.[7]

As one of Cuba's pioneer rap groups, Orishas garnered fame both at home and abroad. In 2006 they guested on the Track "14Me" recorded in Cuba by occasional The Black Eyed Peas producer Poet Name Life. The track was eventually released on the album "The Revolution Presents: Revolution", (Studio !K7 & Rapster Records) a Cuban dance crossover album which also featured Norman Cook a.k.a. Fatboy Slim, Róisín Murphy and Rich File from UK Trip Hop pioneers Unkle. As of October 2009, the members of the trio currently live in different European cities (Madrid, Milan, Paris), with the band based in France.[8] Their incorporation of traditional Cuban beats like salsa and rumba into their rapping is an angle that brings appeal to older Cubans, while simultaneously driving some aspiring Cuban rappers to "look at them with both awe and disappointment" for "selling out to commercial pressures to evoke Cuban nostalgia."[9] Roldan himself has a tendency towards traditional Cuban music, and purposely distances his music from some of the stereotypical characteristics of hip-hop, such as the degrading treatment of women and "everything [else] you do in U.S. hip hop shows".[8]

This article uses material from the article Orishas (band) from the free encyclopedia Wikipedia and it is licensed under the GNU Free Documentation License.

Joseph Haydn Andante und Rondo all'Ongarese aus dem Klaviertrio G-Dur
Update Required To play the media you will need to either update your browser to a recent version or update your Flash plugin.