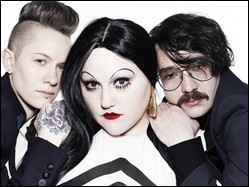 Gossip (formerly The Gossip) is a three-piece American indie rock band formed in 1999 in Olympia, Washington. The band consists of singer Beth Ditto, guitarist Brace Paine and drummer Hannah Blilie.[1] After releasing several recordings, the band broke through with their 2006 studio album, Standing in the Way of Control (2006). A follow-up, Music for Men, was released in 2009. The band plays a mix of post-punk revival, indie rock, and dance rock. Their latest album, A Joyful Noise, was released in May 2012.

Gossip was formed in 1999 in Olympia, Washington, with vocalist Beth Ditto, guitarist Nathan "Brace Paine" Howdeshell and drummer Kathy Mendonça.[2] All three were originally from Searcy, Arkansas; Mendonça moved to Olympia to attend Evergreen State College and Howdeshell and Ditto followed.[2] Howdeshell and Mendonça had been in bands together in Arkansas.[3] The band coalesced when the three members were roommates in Olympia.[2]

In 1999 the independent record label K Records released Gossip's first recording, their eponymous debut EP, The Gossip to coincide with the band's tour with Sleater-Kinney.[2] The band played at the first Ladyfest in Olympia in August 2000 and was included in Time Magazine's article on the festival.[4]

Their next release was their first album That's Not What I Heard and was released by the record label Kill Rock Stars on January 23, 2001. In between that release and their second album, they released the EP Arkansas Heat on May 7, 2002. Movement, the group's second studio album, followed one year later and was released on May 6, 2003. In November 2003, two months after the release of their first live album Undead in NYC on September 9, drummer Kathy Mendonça left the band to pursue a career as a midwife. Established punk drummer Hannah Blilie joined to replace her. The band then dropped the "The" from their name, continuing as plain "Gossip".

The first release featuring new drummer Hannah Blilie was the band's next album Standing in the Way of Control. It was released on January 24, 2006 on Kill Rock Stars, later on in 2006 on UK independent label Back Yard Recordings and was produced by Ryan Hadlock, owner of Bear Creek Studio and Fugazi singer/guitarist Guy Picciotto.

As reported on Pitchfork Media in March 2007, the group signed to Music With a Twist, a subsidiary of Sony Music Label Group, concentrating on LGBT music acts.[5] During the summer of 2007, Gossip was a part of the multi-artist True Colors Tour 2007,[6] which traveled through 15 cities in the United States and Canada. The tour, sponsored by the Logo channel, began on June 8, 2007. Hosted by comedian Margaret Cho and headlined by Cyndi Lauper, the tour also included Debbie Harry, Erasure, Rufus Wainwright, The Dresden Dolls, The MisShapes, The Cliks and other special guests. Profits from the tour went to benefit the Human Rights Campaign.

Gossip is based in Portland, Oregon and has played with bands such as Sleater-Kinney, Le Tigre, CSS, Erase Errata, Mika Miko, Panther, Comanechi, and Mates of State. Gossip also opened for the Scissor Sisters for three dates on their November 2006 tour.

On June 24, 2007 Gossip closed the Glastonbury Festival, playing the final set on the John Peel stage during which Ditto gave a tribute to the late John Peel. Gossip also performed the following year, on the Pyramid Stage.

Gossip launched the Live in Liverpool album in the UK and the U.S. in April 2008. The album was produced by Rick Rubin. The album also features a DVD of their live performance. A new studio album called Music For Men was released in June 2009. The first single from the album, "Heavy Cross", was especially successful in Germany where it was certified triple gold [7] for selling over 450,000 copies and was mentioned as the "most successful internationally produced single" of all time in September 2010.[8] In January 2011 the single broke the German record for the longest selling track in chart history. By 14 January 2011 it had spent 82 consecutive weeks within the German Top 100.[9]

On March 12, 2012, their comeback single,"Perfect World", was unveiled on Zane Lowe's BBC Radio 1 show. Their fifth studio album A Joyful Noise, produced by Xenomania's Brian Higgins, was released in late May.[10][11] Their music evolved and became poppier. The Independent's welcomed the result[12] where as like others Pitchfork were more nuanced.[13] A second single "Move in the Right Direction", was issued in May. During the summer, the band headlined various festivals: they will be on tour until the end of the year.

The song "Heavy Cross" has recently been featured in the new Dior J'adore TV Spots. [14]

Their style has been described as "a soul or gospel" voice with "a sort of funky punk soundtrack".[15] The band stated a liking for rock bands like Birthday Party,[16] Siouxsie and the Banshees,[16][17] Nirvana,[17] The Raincoats[17] but also for other genres like dance and hip hop.[18]

In 2010, Gossip was nominated for an ECHO Award, alongside groups such as Depeche Mode and U2.[20]

This article uses material from the article Gossip (band) from the free encyclopedia Wikipedia and it is licensed under the GNU Free Documentation License.