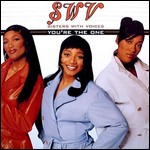 Sisters with Voices, better known as SWV, is an American female R&B, Grammy nominated trio from New York City. Formed in 1990 as a gospel group,[1] SWV became one of the most successful R&B groups of the 1990s. They had a series of hits, including "Weak", "Right Here/Human Nature", "I'm So into You", and "You're the One". The group disbanded in 1998 to pursue solo projects, and reunited in 2005.

SWV (an abbreviation for Sisters With Voices) was formed by Cheryl Gamble, Tamara Johnson and Leanne Lyons (the founding member).[2] After getting their demo together, the trio sent out demo tapes along with bottles of Perrier ("We couldn't afford champagne", says Taj) to catch the attention of record execs all over America. In 1991, after being invited to sing live in front of RCA executives, SWV was signed to an eight album record deal.

Following the success of their first album, SWV appeared on the soundtrack for the 1994 film Above the Rim. The single, "Anything", became a top ten R&B hit and reached No. 18 on the Hot 100 in the spring of 1994. That same year, SWV released The Remixes, which went gold by the end of the year. In the summer of 1995, the trio lent vocal harmonies to Blackstreet's Top 40 R&B hit "Tonight's the Night".

199697: New Beginning, Release Some Tension and A Special Christmas

New Beginning is the second album from R&B group SWV. The first single, "You're the One", became one of their signature songs peaking at number five on the Billboard Hot 100 and topped the Hot R&B/Hip-Hop Singles chart. The second single, "Use Your Heart", saw the debut of the super producers The Neptunes. This song peaked at twenty-two on the Hot 100 and number six on the R&B chart. The last single, "It's All About U", found Taj taking most of the lead as opposed to Coko. The album was certified platinum for shipping 1,000,000 copies in the U.S. alone.[5] Also, in 1995 SWV appeared on the Waiting to Exhale: Original Soundtrack Album, recording the track, "All Night Long".

Release Some Tension is SWV's third album. Guest appearances are made by E-40, P. Diddy, Missy Elliott, Foxy Brown, Lil' Cease, Lil' Kim, Snoop Doggy Dogg, and Redman. The album features hits like "Rain" (which samples Jaco Pastorius's classic "Portrait of Tracy"), "Someone", "Can We" (which was originally included on the soundtrack for the Jamie Foxx film Booty Call), and canceled single "Lose My Cool". "Someone", although featuring one of the biggest producers/artists of the year, Puff Daddy, only reached No. 19 on the Billboard charts which sampled The Notorious B.I.G's "Ten Crack Commandment's and Les McCann's "Valantra". "When U Cry" also sampled Tyrone Davis' "In the Mood". The album was certified gold for shipping 500,000 copies in the U.S. alone. RIAA Database A Special Christmas, a holiday album featuring obth cover versions and original material, was released in the United States on November 18, 1997 by RCA Records. A Special Christmas would be the penultimate album the trio recorded together before they disbanded in 1998. Coko, the group's lead singer, released her first solo album in 1999.

The group split in 1998. The members began leading their own careers. After SWV disbanded, Coko went on to release her first solo album under RCA, titled Hot Coko, released August 1999. The first single, "Sunshine", which was dedicated to her son Jazz, reached the Top 40 position in the R&B charts that summer. However, neither the album nor the singles gathered the same mainstream success as Coko once did with SWV. Meanwhile, Coko was working on a second solo album titled Music Doll in early 2001, but RCA closed the black music division and the project was shelved. Since then, she has concentrated more on her family, and eventually married gospel producer and drummer for Israel and New Breed, Mike "Big Mike" Clemmons, the father of her second son, Jaylon. She currently resides in Virginia Beach, Virginia. In 2001, Coko and her Mother Lady "Clyde" Tibba Gamble did a remake of the song "Tears in Heaven" (originally recorded by Eric Clapton) on the album Rhythm and Spirit: "Love Can Build a Bridge". The album featured other artists such as Jennifer Holliday, Patti Labelle, and Tramaine Hawkins. Clemons sang on the Brent Jones & TP Mobb single "Midnite" in 2002. She also appeared on Youthful Praise's 2003 gospel album Thank You for the Change singing lead on "Up There".

Coko's full gospel solo debut, Grateful, was released in the United States on October 31, 2006[6] and debuted at No. 5 on Billboard's Top Independent albums chart.[7] Grateful includes an all-star cover of The Clark Sisters' "Endow Me" which features R&B singers Faith Evans, Fantasia Barrino and Lil Mo.[8] An alternate version, minus Faith Evans was performed on BET's Celebration of Gospel '07. A special edition of Grateful only available through Wal-Mart includes two bonus tracks "I Wish" and Brent Jones' "Midnite" featuring Coko on lead vocals.

Coko was reported to have joined an all-black touring cast performing the critically acclaimed play The Vagina Monologues, along with Sherri Shepherd, Star Jones, Vanessa L. Williams, and others.[9] In June 2008, Coko performed in Japan for the Billboard Live Tour. She sang some of her solo hits "Sunshine", "Clap Your Hands", and the SWV song "Right Here/Human Nature".

In 2005, SWV reunited and announced plans to record a new album the following year,[3] which did not materialize. In 2007, the group performed dates with After 7, Bobby Brown, New Edition, and Blackstreet.[10] Also in 2007, Johnson-George appeared in the TV One reality series I Married a Baller which documented her life with husband Eddie George, former NFL player and present Nashville entrepreneur.[11] SWV members Coko and Lelee (who sing the theme song along with Taj) appear in a couple of the show's episodes. On June 24, 2008, during a performance from Alicia Keys at the BET Awards of 2008, SWV made a special appearance with the original line up from En Vogue and TLC. SWV sang "Weak" with Alicia and later performed "Waterfalls" with the two other R&B girl bands. Coko currently resides in Virginia Beach, Lelee in Atlanta and Taj in Nashville.. Tamara "Taj" Johnson-George was a contestant on Survivor: Tocantins, in which she came in fourth place. She was blindsided by her former alliance of James "J.T." Thomas, Jr. and Stephen Fishbach. She became the sixth Jury Member.[12] She participated in a 2009 national tour of the Vagina Monologues with an all-black cast, most of whom are also former reality show contestants.[13] SWV appeared on The Mo'Nique Show on February 2, 2010, performing Patti LaBelle's "If Only You Knew". Lelee and Coko provided the lead vocals.

In 2011, SWV signed a record deal with Mass Appeal Entertainment and E1 Entertainment. On June 10, 2011, SWV was featured on the official remix of Chris Brown's remake of their "Right Here/Human Nature" song, "She Ain't You". SWV released "Co-Sign"[14] on December 15, 2011 via iTunes[15] as the first single from their fourth studio album, I Missed Us.

SWV appeared on the television talk show The Wendy Williams Show on April 17, 2012 to promote the release of I Missed Us and to perform the hit song "Co-Sign". The album then went to No. 1 on the iTunes R&B albums chart. On June 1, 2012, SWV announced that their next single to be released from I Missed Us would be "Love Unconditionally".

On July 7, 2013, during the Essence Music Festival, SWV announced that WE tv green-lit 6 episodes set to air in early 2014 that will detail their lives as a group and individually, professionally and personally. It will also address their 1998 breakup and their subsequent reunion.[18]

SWV featured a number of successful female groups as opening acts throughout their various touring engagements. Those groups included such contemporaries as Xscape, Jade, Total, 702, and Destiny's Child.

This article uses material from the article SWV from the free encyclopedia Wikipedia and it is licensed under the GNU Free Documentation License.