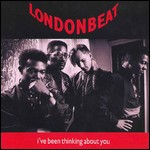 Londonbeat is a British-American dance band who scored a number of pop and dance hits in the early 1990s. Band members are American Jimmy Helms (who also had a successful solo career and sang radio jingles for Radio Hallam and Hereward Radio in the UK);[1] Jimmy Chambers[2] (born 20 January 1946), from Trinidad, and Myles Kayne. Former members include multi-instrumentalist William Henshall (credited as Willy M); George Chandler (formerly a founding member and frontman of The Olympic Runners) and Marc Goldschmitz (subsequently a member of the band Leash).

Londonbeat's career started in the Netherlands where "There's a Beat Going On" reached the Top 10, and then "9 A.M (The Comfort Zone)" which subsequently became a modest success in the United Kingdom. They are best known for their song "I've Been Thinking About You", which hit Number 1 on the Billboard Hot 100 and the Hot Dance Music/Club Play charts in 1991, and for their close harmonies. Their follow-up single, "A Better Love", became a Billboard Hot 100 Top 20 hit, and they returned to Number 1 on the dance chart with "Come Back" (Hot 100 number 62).

A demo of "I've Been Thinking About You" surfaced on audio cassettes and circulated amongst record companies around the time Londonbeat released their début in 1988. "I've Been Thinking About You" was originally intended for release on Speak. However, record labels advised the band to hold off releasing the song on their debut LP so that the band could, as labels said, "...find its footing; develop an audience". The demo recording, originally completed in late 1987, is currently circulating on the Internet, and originally brought to public attention in a link on a German message board in 2006. German magazines, however, reported on the song just as Speak was being released in 1988.

In 1995, Londonbeat entered the UK heats of the Eurovision Song Contest with "I'm Just Your Puppet on a ... (String)". However, they were not selected to enter the main contest (losing out to rap group Love City Groove) and the single stalled at Number 55 on the UK Singles Chart.

In 2003, Londonbeat re-grouped with a new lineup and signed to German record label Coconut. An album called Back in the Hi-Life featured re-recordings of "A Better Love" and "I've Been Thinking About You" among the new tracks.

Marc Goldschmitz left the band in 2004. Currently living in Berlin, he now plays guitar in the band Leash.[3]

In 2011, Londonbeat were featured on two tracks on The Crossing (Expansion Records) by Brazilian pianist Eumir Deodato, the title track (with guest percussionist Paco Sery) and "No Getting Over You".

Chambers and Chandler were backing vocalists for Paul Young's 1985 album The Secret Of Association.[4]

This article uses material from the article Londonbeat from the free encyclopedia Wikipedia and it is licensed under the GNU Free Documentation License.