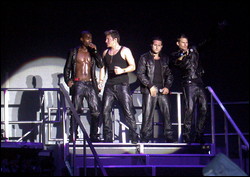 Not to be confused with Blue (Scottish band).

Blue are an English R&B group consisting of members Antony Costa, Duncan James, Lee Ryan and Simon Webbe. The band originally formed in 2000, releasing three studio albums, All Rise (2001), One Love (2002) and Guilty (2003) that all peaked at number one in the United Kingdom alongside releasing 16 singles, over a four-year period. The group also worked alongside artists such as Stevie Wonder, Elton John and Lil Kim. In late 2004, the group announced that they would be going on a two-year hiatus and released their first compilation album, Best of Blue on 15 November 2004. In 2005 the group announced that they would pause and go into hiatus to allow some members to develop their solo careers

On 28 April 2009, Blue announced that they had reformed, and would return to the stage in the summer of that year.[1] The band reunited once again on 29 January 2011 and represented the United Kingdom at the 2011 Eurovision Song Contest in Düsseldorf, Germany with the song "I Can" coming in 11th place with 100 points. Blue released their fourth studio album, Roulette on 25 January 2013 with "Hurt Lovers" as the lead single. On 21 February 2013, it was confirmed that the group would be joining The Big Reunion in which six groups from the past reform for a one off gig including Liberty X, Atomic Kitten and 5ive. From May 2013, the group will be touring the UK and Ireland with the other groups in The Big Reunion concert series.[2] On 27 March 2013, the group announced they would embark on their first headlining tour later on in the year, their first tour in nearly ten years. As of 2013, Blue have sold over 13 million records worldwide.

In May 1999, Lee Ryan and Antony Costa met at the ages of 15 and 17, respectively, when auditioning for a boy band on ITV's This Morning, with Simon Cowell putting the group together. Ryan made the band alongside Will Young (who would go on to win the first series of Pop Idol in 2002), although Costa was not chosen. The boy band never took off, but Ryan and Costa remained friends following their meeting and in 2000, alongside Duncan James, decided to form a group. The members wanted a fourth member as they felt that something was missing, so they went on to audition for their fourth member and met Simon Webbe, who later joined the group.

Blue started recording for their debut album following their new line-up. The band released their debut single "All Rise" in May 2001 and it reached number four on the UK Singles Chart. Their follow up single "Too Close" was released in August 2001 and peaked at number one. Following this, the band went to New York City to film the "Too Close" music video, and whilst there, they witnessed the attacks on the World Trade Center. The following month, Blue were being interviewed on the BBC and, in the midst of it, Ryan commented that "This New York thing is being blown out of proportion" and asked "What about whales? They are ignoring animals that are more important. Animals need saving and that's more important." The other members of the band tried to silence Ryan, but he went on. This caused a huge media backlash that resulted in Blue losing a record deal in the United States and campaigns to sack Ryan from the group.[3] Despite the backlash, Blue went on to achieve a second number one in November with the ballad "If You Come Back". The album All Rise was released in time for Christmas and reached number one, eventually selling in excess of 1.8 million albums in the UK. The final single from the album, "Fly by II", reached number six in March 2002.

Blue's second album, One Love, was released in October 2002, entering at number one on the UK Albums Chart and selling more than 150,000 copies. Three singles were released from the album: "One Love", which peaked at number three, "Sorry Seems to Be the Hardest Word", featuring vocals from Elton John, which peaked at number one, and "U Make Me Wanna", which peaked at number four. The song "Supersexual" was issued in parts of South America and Spain in order to promote the band in the region. In June 2003, Hugh and David Nicholson of 1970s Scottish band Blue took the group to court, attempting to sue them and their record label EMI for £5 million. The case was a high-profile High Court case over the rights to use the name Blue. After some negotiation, the two groups agreed to drop the case and were both allowed to continue to be known as Blue and to use the name commercially.[4]

In November 2004, the band released Best of Blue, a greatest hits compilation. The album spawned the singles "Curtain Falls", which peaked at No. 4 in the UK, "Get Down on It" and "Only Words I Know", which peaked at No. 2 in France and Italy. The album peaked at No. 2 on the UK Albums Chart and was awarded a double platinum certification. Following the release of Best of Blue, band members Simon Webbe and Antony Costa made the decision to release an album compiling a selection of the group's b-sides, remixes and previously unreleased material. The album also includes three tracks only previously in Japan: "The Gift", "It's Alright" and "Elements". The album also includes band member Duncan James' debut solo single, "I Believe My Heart". By the indication of the album booklet, a live version of "Lonely This Christmas" from CD:UK was intended to be track seven on the album, however, was removed from the tracklisting for unknown reasons. The album was released in July 2005, becoming available in several European countries, as well as Japan, Thailand[5] and China, but wasn't released in the UK.

In 2005 the group announced that they would pause and go into hiatus to devote himself to a solo career for some time. In April 2009, the band agreed to perform at the Silverstone Classic festival in August 2009.[6] It was revealed that Blue had reformed and had written new material, due to be released in a joint partnership with Innocent Records and EMI Music, but it never happened at the time.[7]

It was announced on 29 January 2011 that Blue would reunite and also represent the United Kingdom in the Eurovision Song Contest 2011, with their entry "I Can".[8] It coincided with the tenth anniversary of the establishment of the band in 2001 and a one hour documentary was broadcast in April 2011 celebrated their preparations for the final.[9] It was the third time the group has Eurovision ambitions as group member Lee Ryan wrote and composed "Guardian Angel", Andy Scott-Lee's song for the 2005 edition of Making Your Mind Up. Furthermore, Antony Costa came second in the 2006 edition of the show with the song "It's A Beautiful Thing".[10] Group member Duncan James was a panellist on all episodes of the Eurovision: Your Country Needs You series in 2009, which Jade Ewen won. He also announced the UK votes in the Eurovision Song Contest 2009 final.[8] Blue became the first UK representatives since The Shadows in 1975 to have had multiple no.1 singles in the UK chart prior to appearing in Eurovision,[11] and the first since Sonia in 1993 to have had a no.1 at all before entering the competition.[12] The song "I Can" premiered on 11 March 2011, on The Graham Norton Show.[13] In the contest, they came 11th with 100 points. After the contest Blue said they were the victims of political voting, claiming they would have finished higher if countries had voted for the performance rather than their neighbours.[14] It later turned out when the European Broadcasting Union (who runs Eurovision) released the split Televote & Jury results, That Blue came in 5th place with the European voters and the final result was down to coming in 22nd place on the Jury vote. Duncan James insisted that the result of their Eurovision bid won't affect their UK comeback, adding: "Should the worst happen, we're still going to press ahead with the album. It won't be the last of us we're all fully committed to this band again."[15]

The band revealed during an interview that they had recorded a collaboration with American R&B superstar Bruno Mars for their upcoming fourth studio album. Discussing the record with Digital Spy, Lee Ryan said: "We've been writing with Ne-Yo, and I've written at least a couple of songs on my own that will probably make the album. We've also been working with Bruno Mars on a song called "Black and Blue" he's sending his parts over from a demo we recorded a while ago. It's got some haunting notes on the chorus." They also revealed that three tracks on the album had been produced by RedOne, and that they felt that the material was "their best work to date".[15] During February 2012, the band embarked on a small tour across Manila, performing with fellow boyband A1 and Jeff Timmons in three special concerts, two of which included the Smart Araneta Coliseum on 25 February 2012, and the Singapore Indoor Stadium on 28 February. The tour was billed as "Boybands: The Greatest Hits Tour".[16]

On 22 June 2012, the band premiered their new song, "Hurt Lovers", during a concert in China. In an interview shortly after the concert, the band claimed that "Hurt Lovers" was one of the first tracks they recorded after re-uniting, and that it was an obvious choice for their comeback single. It received positive reception across Asia, before being officially premiered in Germany on 6 October 2012. Thus, the creators of the film Schluss Macher approached the band, and asked if the song could be used as the official theme for the film. Thus, the track will receive an early release on 4 January 2013, before being released across the world later in the year. In promotion of the single, the band performed it live on Vocea României on 4 December 2012,[17] as well as embarking on an acoustic radio tour across six cities in Germany.[18]

In October 2012, the group confirmed via their official Facebook page that the title of their fourth studio album would be Roulette. It was also revealed that the album will receive an early release in Germany, being made available from 25 January 2013. The band shot the album's artwork in a deserted casino in November 2012.[19] On 21 February 2013, it was confirmed that the group would join ITV2's reality series The Big Reunion.[20][21] The bands were originally only supposed to perform a one-off concert at London's Hammersmith Apollo on 26 February 2013, but when the entire show sold out in under five minutes shortly after the premiere of the first episode on 31 January 2013.[22] A DVD of the Hammersmith Apollo concert will be released in April 2013.[23] On 11 February, it was confirmed that, following high ticket demands and the popularity of The Big Reunion, a full 12-date UK tour would be taking place from 312 May 2013.[24]

On 28 April 2013 Roulette was released in United Kingdom and Ireland.[25] On 16 May the band released "Without You" as the second single from the album only in Germany, Swiss and Austria. The music video premiered the same day. "Break My Heart" was released as the third single from the album on 29 June for radio premiere and 5 August 2013 for digital download. The single was released as official single only in Germany and promotional radio single on United Kingdom.[26] The music video was premiered in 18 August.

This article uses material from the article Blue (English band) from the free encyclopedia Wikipedia and it is licensed under the GNU Free Documentation License.