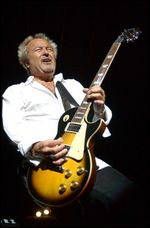 Michael Leslie Jones (born 27 December 1944) is an English musician, singer, songwriter, and record producer, best known as the founding member of the British-American rock band Foreigner. Prior to Foreigner, he was in the band Spooky Tooth.

Michael Leslie Jones was born on 27 December 1944 in Portsmouth, England. Jones started playing guitar at an early age. After attending a couple of live concerts by Elvis Presley???, Jones decided to pursue a career in music. He began his professional music career in the early 1960s as a member of the bands Zoot Money's Big Roll Band and Nero and the Gladiators, who scored two minor British hit singles in 1961. After the demise of Nero and the Gladiators, Jones worked as a songwriter and session musician in France for such artists as Françoise Hardy, Sylvie Vartan, and Johnny Hallyday ("The French Elvis"), for whom he wrote many songs, including "Je suis né dans la rue" and "À tout casser" (which features Jimmy Page on guitar). When The Beatles toured France in 1964, they befriended Mick when Hallyday's girlfriend and future wife Sylvie Vartan played on the same bill as they did. Between 1965 and 1971 Jones recorded in France with Tommy Brown (Thomas R. Browne) as State of Mickey & Tommy, as well as under other session names including the Blackburds, Nimrod, and the J&B.

After leaving France to return to his home country, Jones joined Gary Wright, formerly of the band Spooky Tooth, to form Wonderwheel in 1971. In 1972 Jones and Wright reformed Spooky Tooth, and after this Jones was a member of the Leslie West Band. He also played guitar on the albums Wind of Change (1972) for Peter Frampton, and Dark Horse (1974) for George Harrison.

In 1976, Jones formed Foreigner with Ian McDonald and recruited lead singer Lou Gramm. Jones co-produced all of the band's albums and co-wrote most of their songs with Gramm. Jones wrote the band's most successful single, "I Want to Know What Love Is".[1][2] Tensions developed within the band during the late 1980s and were attributed to a difference in musical taste between Gramm, who favoured a more hard-edged rock, as opposed to Jones' interest in synthesisers. Gramm left the band in 1990 but returned in 1992. In 1989, Jones released his only solo album titled Mick Jones on the Atlantic Records label. Jones is the only person to play on every Foreigner album.

He was married to socialite/writer Ann Dexter-Jones, mother of Mark, Samantha and Charlotte Ronson. Ann and Mick have two children, Annabelle and Alexander Dexter-Jones. Married for nearly 25 years, in 2007 Jones and Dexter-Jones divorced. He also has two sons, from prior relationships, Roman and Christopher Jones.

In addition to the Foreigner albums, Jones has produced the following:

This article uses material from the article Mick Jones (Foreigner) from the free encyclopedia Wikipedia and it is licensed under the GNU Free Documentation License.