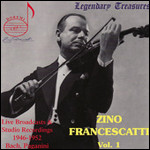 Zino Francescatti was born in Marseilles, to a musical family. Both parents were violinists. His father, who also played the cello, had studied with Camillo Sivori. Zino studied violin from age three and was quickly recognized as a child prodigy. He began performing at the age of five and made his debut at age 10, playing Beethoven's Violin Concerto.

In 1927 he went to Paris to teach at the École Normale de Musique; he also conducted the Concerts Poulets. He made his first world tour in 1931 and his American debut with Sir John Barbirolli and the New York Philharmonic in 1939, playing Paganini's Violin Concerto No. 1. His recording of the concerto is still regarded as one of the best. For three decades after 1945 he had an exceptionally impressive international career.

Francescatti made many renowned LPs, including a set of the complete Beethoven violin-piano sonatas with Robert Casadesus, a frequent musical collaborator of his. Both in concerts and on disc, he performed on the celebrated "Hart" Stradivarius of 1727. Upon his retirement in 1976, he sold the instrument and established the Zino Francescatti Foundation, to assist young violinists, in La Ciotat. In 1987 an international violin competition was organized in his honor in Aix-en-Provence.

"Known for his lyrical performance style and as a champion of contemporary violin music by such composers as Darius Milhaud, Leonard Bernstein, and Karol Szymanowski." - Encyclopædia Britannica

"Francescatti's playing was marked by a seemingly effortless technique, warmth of expression, and tonal elegance. "[1]

"One of the great classical violinists of the twentieth century. Among his recordings are Saint-Saëns's famous and popular Introduction and Rondo Capriccioso, with Leonard Bernstein conducting the New York Philharmonic." [2]

This article uses material from the article Zino Francescatti from the free encyclopedia Wikipedia and it is licensed under the GNU Free Documentation License.

Felix Mendelssohn-Bartholdy Symphonischer Satz c-moll
Update Required To play the media you will need to either update your browser to a recent version or update your Flash plugin.