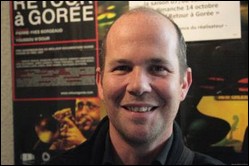 Born August 25, 1963 in Monthey, Switzerland, Pierre-Yves Borgeaud has a bachelor's degree in arts at the Lausanne University in 1990, with a thesis about the influence of jazz on French writers (Paul Morand, Boris Vian, Jean-Paul Sartre and Louis-Ferdinand Céline). He has worked as an independent journalist, writing about music and moving images in different media. He also played the drums in jazz and funk bands and worked as a music producer.

In 1996, Pierre-Yves Borgeaud is studying at the New York University and obtains a certificate at the dpt. of Film, Video & Broadcasting. Since 97, he’s working on documentaries and music videos, especially for the ECM label in Germany. He also participates to a video installation workshop at the Film/Video Arts, New York. In 1998, he becomes one of the Swiss pioneers of VJing,[1] presenting live performances with musicians like Pierre Audétat, Christy Doran, Nils Petter Molvaer or Don Li (composer/musician).

Director, producer, and interdisciplinary artist, Borgeaud founded Momentum Production in 1999. In 2000, he receives the price "Young artist" in video awarded by a council of the arts in Switzerland. In 2003, his first long feature iXieme: diary of a prisoner is awarded with the Golden Leopard in Video at the Locarno International Film Festival.[2] In 2004, the short film Interface is nominated for the best Swiss short film. In 2008, his film Return to Goree, with Senegalese superstar Youssou N'Dour, is distributed and awarded worldwide.[3] Best Documentary at the 16th Pan African Film Festival in Los Angeles.

In 2013, Pierre-Yves Borgeaud's new long feature documentary, Viramundo with Brazilian singer, composer and icon Gilberto Gil is presented for the world premiere at the Visions du Réel Film Festival in Nyon and distributed worldwide. The film also inaugurates the T.I.D.E. Experiment for pan-European and multi-support releases.[4]

Viramundo: a musical journey with Gilberto Gil, a long feature documentary with the Brazilian musician and ex-minister of culture promoting the power of cultural diversity around the Southern hemisphere (2013).

Subjective Cinema. An experimental film shot with some inhabitants of Mireuil in the suburbs of French town La Rochelle, a carte blanche given by the International Film Festival La Rochelle (2009).

Return to Gorée. A musical documentary with African singer Youssou N’Dour, Amiri Baraka, Idris Muhammad and others. A road movie on the paths of jazz and slavery (2007).[5]

Music Hotel. Some musicians associated to the ECM label are working together during a very special festival in Germany. With Manfred Eicher, Tomasz Stanko, John Surman, Dino Saluzzi (1998).

Video performances and other works

Eye in the City. Live video and music performance with guitarist Christy Doran. Première at the Jazz Festival Lausanne / Onze Plus. (1999).

This article uses material from the article Pierre-Yves Borgeaud from the free encyclopedia Wikipedia and it is licensed under the GNU Free Documentation License.