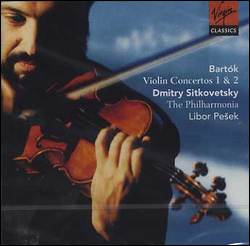 Dmitry Sitkovetsky was born in Baku, Azerbaijan, to violinist Julian Sitkovetsky and pianist Bella Davidovich. His father died in 1958, when Sitkovetsky was just three years old and the family moved to Moscow where Dmitry entered the prestigious Moscow Conservatory. In 1977, aged twenty-two, he decided to leave the Soviet Union. In order to do this, he registered himself as mentally ill. Fortunately his plan worked and Dmitry arrived in New York City on September 11, 1977, where he immediately began studying at the Juilliard School.

Dmitry Sitkovetsky has built up a successful career as a violinist, conductor, arranger, chamber musician and festival director. Born in Baku, Azerbaijan, he grew up in Moscow studying at the Moscow Conservatory and after his emigration in 1977, at the Juilliard School in New York. Sitkovetsky has performed as a soloist with a number of the world's leading orchestras including the Berlin, New York and LA Philharmonic Orchestras, Leipzig Gewandhaus, Concertgebouw Orchestra, all of the major London orchestras, NHK, Chicago, Philadelphia and Cleveland orchestras. He has performed at a number of high-profile festivals including Salzburg, Lucerne, Edinburgh, Verbier, Istanbul, Newport, and the IMG Tuscan Sun and Napa Valley Festivals.

Sitkovetsky also has a flourishing career as a conductor. In 1996, he was appointed principal conductor and artistic advisor of the Ulster Orchestra for five years, in 2001, was appointed conductor laureate, and from 2002-2005 held the position of principal guest conductor of the Russian State Orchestra[disambiguation needed]. From 2006-2009, he was the artist-in-residence at the Orquesta Sinfonica de Castilla y Leon (Spain) a position that involved conducting, solo playing, touring, chamber music and masterclasses. In 2003, Sitkovetsky was appointed music director of the Greensboro Symphony Orchestra, a position he holds to this day. As a guest conductor, he has worked with leading orchestras including the London and Royal Philharmonic Orchestras, Academy of St Martin in the Fields, BBC, San Francisco, St. Louis, Seattle and Dallas Symphony Orchestras, Ensemble Orchestral de Paris, Santa Cecilia and the St. Petersburg Philharmonic.

Sitkovetsky is also the founding director of the New European Strings Chamber Orchestra (NES CO), established in 1990, which is composed of distinguished string players from Eastern & Western Europe. Since his successful transcription of Bachs Goldberg Variations for string trio, he has transcribed more than 30 works mostly for string orchestra by Bach, Haydn, Beethoven, Brahms, Dohnanyi, Bartók, Tchaikovsky, Shostakovich, Stravinsky and Schnittke. He has been a member of ASCAP since 1985 and his transcriptions are published by Doblinger, Sikorski and Schirmer.

Between 1983 and 2002 Sitkovetsky was the Artistic Director of a number of music festivals including the Korsholm Music Festival in Finland (1983-1993 and 2002), Seattle International Music Festival (1992-1997), The Silk Route of Music Festival in Baku, Azerbaijan (1999) and worked with a diverse range of artists such as Argerich, Ashkenazy, Bashmet, Davidovich, Harrell, Kissin, Maisky, Ohlsson, Penderecki, Repin, Schnittke and Shchedrin. In May 2007, Sitkovetsky was the Artist-in-Residence at the Bodensee Festival in Germany where he performed a wide variety of activities: soloist, conductor, chamber musician, recitalist, masterclasses and conducted the NES Chamber Orchestra in residence.

He has an active and varied recording career with an extensive discography which includes all the major violin concerti, numerous chamber music works as well as orchestral recordings that hes conducted. In July 2010, Hänssler Classic released a boxed set of the complete Mozart Violin Sonatas with Antonio Pappano and Konstantin Lifschitz. The same label, recently released Sitkovetskys string orchestra transcriptions of works by Shostakovich and Stravinsky with the NES CO as well as Piano Trios of Rodion Shchedrin and Peteris Vasks (Hänssler). His most recent concerto release is Dutilleuxs L'Arbre des Songes with the Concertgebouw Orchestra and Mariss Jansons (Concertgebouw Live). Forthcoming releases include a new recording of the Goldberg Variations for String Trio to celebrate the 25th anniversary of the transcription.

Sitkovetskys increasing involvement in contemporary music shows a keen interest in performing new repertoire. He premiered the violin concerti written for him by John Casken (1995) and Krzystof Meyer (2000) and often performs works by Dutilleux, Penderecki, Schnittke, Pärt and Shchedrin who has written several works for Sitkovetsky both as violinist and conductor. In 2005, he performed two major works by John Corigliano - his Second Symphony and the Red Violin Suite in a play/conduct concert. Sitkovetskys latest premiere was The Gifts of the Magi written by Jakov Jakoulov after OHenrys famous story and narrated by Peter Coyote with the Greensboro Symphony. He also played a unique solo recital of contemporary music at the Verbier Festival in 2009 with a programme by Rodion Schedrin, Peteris Vasks, Lera Auerbach and Franghiz Ali-Zadeh.

Since 1987 he has resided in London with his wife, Susan, and their daughter, Julia, who attends The Queen's College, Oxford.

This article uses material from the article Dmitry Sitkovetsky from the free encyclopedia Wikipedia and it is licensed under the GNU Free Documentation License.

Max Bruch Schwedische Tänze op. 63 Nr. 4-7
Update Required To play the media you will need to either update your browser to a recent version or update your Flash plugin.