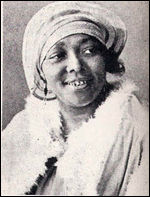 Lucille Bogan (April 1, 1897 August 10, 1948)[1] was an American blues singer, among the first to be recorded. She also recorded under the pseudonym Bessie Jackson. The music critic and sexologist Ernest Borneman stated that Bogan, along with Ma Rainey and Bessie Smith, was in "the big three of the blues".[2]

She was born Lucille Anderson in Amory, Mississippi,[3] and raised in Birmingham, Alabama.[2] In 1914, she married Nazareth Lee Bogan, a railwayman, and gave birth to a son, Nazareth Jr., in either 1915 or 1916. Lucille later divorced Nazareth and married James Spencer, who was 22 years younger than herself.

She first recorded vaudeville songs for Okeh Records in New York in 1923, with pianist Henry Callens.[3] Later that year she recorded "Pawn Shop Blues" in Atlanta, Georgia, which was the first time a black blues singer had been recorded outside New York or Chicago.[4] In 1927 she began recording for Paramount Records in Grafton, Wisconsin, where she recorded her first big success, "Sweet Petunia", which was covered by Blind Blake. She also recorded for Brunswick Records, backed by Tampa Red and Cow Cow Davenport.

By 1930 her recordings had begun to concentrate on drinking and sex, with songs such as "Sloppy Drunk Blues" (covered by Leroy Carr and others) and "Tricks Ain't Walkin' No More" (later recorded by Memphis Minnie). She also recorded the original version of "Black Angel Blues", which (as "Sweet Little Angel") was covered by B.B. King and many others. Trained in the rowdier juke joints of the 1920s, many of Bogan's songs, most of which she wrote herself, have thinly-veiled humorous sexual references. The theme of prostitution, in particular, featured prominently in several of her recordings. In 1933 she returned to New York, and, apparently to conceal her identity, began recording as Bessie Jackson for the Banner (ARC) label. She was usually accompanied on piano by Walter Roland, with whom she recorded over 100 songs between 1933 and 1935, including some of her biggest commercial successes including "Seaboard Blues", "Troubled Mind", and "Superstitious Blues".[2]

Her other songs included "Stew Meat Blues", "Coffee Grindin' Blues", "My Georgia Grind", "Honeycomb Man", "Mr. Screw Worm In Trouble", and "Bo Hog Blues". Her final recordings with Roland and Josh White included two takes of "Shave 'Em Dry", recorded in New York on Tuesday March 5, 1935. The unexpurgated alternate take is notorious for its explicit sexual references, a unique record of the lyrics sung in after-hours adult clubs.[4] Another of her songs, "B.D. Woman's Blues", takes the position of a "bull dyke" ("B.D."), with the line "Comin' a time, B.D. women, they ain't gonna need no men" "They got a head like a sweet angel and they walk just like a natural man." "They can lay their jive just like a natural man."[3]

She appears not to have recorded after 1935, and spent some time managing her son's jazz group, Bogan's Birmingham Busters, before moving to Los Angeles shortly before her death from coronary sclerosis in 1948.[1] She is interred at the Lincoln Memorial Park, Compton, California.[5]

This article uses material from the article Lucille Bogan from the free encyclopedia Wikipedia and it is licensed under the GNU Free Documentation License.