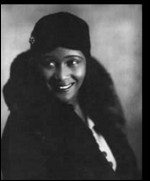 Spivey's first professional experience was in a family string band led by her father in Houston. After he died, the seven-year-old Victoria played on her own at local parties. In 1918, she was hired to accompany films at the Lincoln Theater in Dallas.[7] As a teenager, she worked in local bars, nightclubs, and buffet flats, mostly alone, but occasionally with singer-guitarists, including Blind Lemon Jefferson.[4] In 1926 she moved to St. Louis, Missouri, where she was signed by Okeh Records. Her first recording, "Black Snake Blues" (1926),[8] sold well, and her association with the label continued. She recorded numerous sides for Okeh in New York City until 1929, when she switched to the Victor label. Between 1931 and 1937, more recordings followed for Vocalion Records and Decca Records,[4] and, working out of New York, she maintained an active performance schedule. Her recorded accompanists included King Oliver, Louis Armstrong, Lonnie Johnson, and Red Allen.[6]

The Depression did not put an end to Spivey's musical career. She found a new outlet for her talent in 1929, when the film director King Vidor cast her to play Missy Rose in his first sound film, Hallelujah!.[9] Through the 1930s and 1940s Spivey continued to work in musical films and stage shows, including the hit musical Hellzapoppin (1938), often with her husband, the vaudeville dancer Billy Adams.[4]

In 1951 Spivey retired from show business to play the pipe organ and lead a church choir, but she returned to secular music in 1961, when she was reunited with an old singing partner, Lonnie Johnson, to appear on four tracks on his Prestige Bluesville album Idle Hours. The folk music revival of the 1960s gave her further opportunities to make a comeback. She recorded again for Prestige Bluesville, sharing an album, Songs We Taught Your Mother, with fellow veterans Alberta Hunter and Lucille Hegamin, and began making personal appearances at festivals and clubs, including the 1963 European tour of the American Folk Blues Festival.

In March 1962 Spivey and Big Joe Williams recorded for Spivey Records, with harmonica accompaniment and backup vocals by Bob Dylan. The recordings were released on Three Kings and the Queen (Spivey LP 1004) and Kings and the Queen Volume Two (Spivey LP 1014). (Dylan was listed under his own name on the record covers.[10]) In 1964 Spivey made her only recording with an all-white band, the Connecticut-based Easy Riders Jazz Band, led by the trombonist Big Bill Bissonnette. It was released first on an LP and later re-released on compact disc.

This article uses material from the article Victoria Spivey from the free encyclopedia Wikipedia and it is licensed under the GNU Free Documentation License.