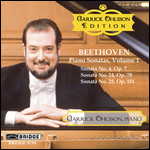 Garrick Ohlsson (born April 3, 1948 in New York) is an American classical pianist.[1] Ohlsson was the first American to win first prize in the International Frédéric Chopin Piano Competition, in 1970.[2] He also won first prize at the Busoni Competition in Italy[3] and the Montreal Piano Competition in Canada. Ohlsson was awarded the Avery Fisher Prize in 1994[4] and received the 1998 University Musical Society Distinguished Artist Award in Ann Arbor, Michigan.

Ohlsson began his studies at the age of eight at the Music Conservatory of Westchester in White Plains and, at the age of 13, began studying at the Juilliard School. His musical development has been influenced in completely different ways by a succession of distinguished teachers, most notably Claudio Arrau, Olga Barabini, Tom Lishman, Sascha Gorodnitzki, Rosina Lhévinne and Irma Wolpe.[5] Although Ohlsson is especially noted for his performances of the works of Chopin, Mozart, Beethoven and Schubert, he has a broad range from Bach and Busoni to Copland and Gershwin. Writing in The New York Times, music critic Allan Kozinn has characterized Ohlsson's repertory as "huge."[6]

Ohlsson is an avid chamber musician and has collaborated with the Cleveland, Emerson, Takács and Tokyo string quartets, among other ensembles. In 2005-2006, Ohlsson toured with the Takács Quartet. Ohlsson is also a founding member of San Francisco's FOG Trio, together with violinist Jorja Fleezanis and cellist Michael Grebanier.[7]

In 2006-2007, he opened the Mostly Mozart Festival in New York. He has also performed at the BBC Proms with the Budapest Festival Orchestra. In 2010, he visited Australia and gave concerts in Melbourne.

Ohlsson possesses an unusually vast repertoire that ranges over some eighty concertos. He is also known for his exceptional keyboard stretch (a 12th in the left hand and an 11th in the right).[9]

Garrick Ohlsson has recorded with the following labels:

This article uses material from the article Garrick Ohlsson from the free encyclopedia Wikipedia and it is licensed under the GNU Free Documentation License.

Georges Bizet Danse bohème aus der Carmen-Suite Nr.2
Update Required To play the media you will need to either update your browser to a recent version or update your Flash plugin.