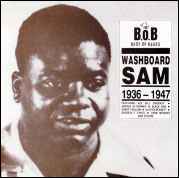 Born in Walnut Ridge, Arkansas, United States, and reputedly the half-brother of Big Bill Broonzy,[1] Brown moved to Memphis, Tennessee in the 1920s, performing as a street musician with Sleepy John Estes and Hammie Nixon.[2] He then moved to Chicago in 1932, performing regularly with Broonzy, and appearing with him and other musicians including Memphis Slim and Tampa Red on innumerable recording sessions for Lester Melrose of Bluebird Records.[2]

In 1935 he began recording in his own right for both Bluebird and Vocalion Records, becoming one of the most popular Chicago blues performers of the late 1930s and 1940s, selling numerous records and playing to packed audiences. He recorded over 160 tracks in those decades.[3] His strong voice and songwriting talent overcame his stylistic limitations.

By the 1950s, his audience began to shrink, largely because he had difficulty adapting to the new electric blues.[2] His final recording session for RCA Victor was held in 1949, he retired from music for several years, and became a Chicago police officer.[4] He recorded a session in 1953 with Broonzy and Memphis Slim, and in 1959 Samuel Charters included his "I've Been Treated Wrong" on the compilation The Country Blues for Folkways Records. Brown made a modest but short-lived comeback as a live performer in the early 1960s.[2]

He died of heart disease in Chicago, in November 1966,[1] and was buried in an unmarked grave at the Washington Memory Gardens Cemetery in Homewood, Illinois.

A September 18, 2009 concert held by executive producer, Steve Salter, of the Killer Blues organization[5] raised monies to place a headstone on Washboard Sam's grave. The show was a success and a headstone was placed in October 2009. The concert was held at the Howmet Playhouse Theater[6] in Whitehall, Michigan. It was recorded by Vinyl Wall Productions and filmed for television broadcast in the mid-Michigan area by a television crew from the Central Michigan University.[7] The concert featured musical artists such as Washboard Jo,[8] R.B. and Co. and was headlined by the Big House Blues Band.[9][10]

This article uses material from the article Washboard Sam from the free encyclopedia Wikipedia and it is licensed under the GNU Free Documentation License.