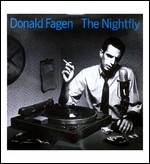 Donald Jay Fagen (born January 10, 1948) is an American musician best known as the co-founder, lead singer and keyboardist of the band Steely Dan.

Fagen was born in Passaic, New Jersey, on January 10, 1948,[1] to Jewish parents, Joseph "Jerry" Fagen, an accountant, and his wife, Elinor, a homemaker who had been a swing singer in upstate New York's Catskill Mountains from childhood through her teens.[2][3] His family moved to the suburb of Fair Lawn around 1958 and soon after to a house on Bedford Road in the Kendall Park section of South Brunswick, New Jersey. The transition upset him; he detested living in the suburbs. He later recalled that it "was like a prison. I think I lost faith in [my parents'] judgment... It was probably the first time I realized I had my own view of life." His life in Kendall Park, including his teenage love of late-night radio,[4] inspired his album The Nightfly.[2]

Fagen became interested in rock and rhythm and blues (R&B) in the late 1950s. The first record he bought was "Reelin' and Rockin'" by Chuck Berry.[2] At age eleven, he was recommended music by a cousin and went to the Newport Jazz Festival, becoming what he called a "jazz snob": "I lost interest in rock 'n' roll and started developing an anti-social personality."[5] In the early 1960s, beginning at age twelve, he often went to the Village Vanguard, where he was particularly impressed by Earl Hines, Willie "The Lion" Smith, and Bill Evans.[6] He regularly took the bus to Manhattan to see performances by jazz musicians Charles Mingus, Sonny Rollins, Thelonious Monk, and Miles Davis. He learned to play the piano, and he played baritone horn in the high school marching band.[5] He developed a lifelong fondness for table tennis.[7] In his late teens he was drawn to soul music, funk, Motown, and Sly and the Family Stone. He has also expressed admiration for the Boswell Sisters, Henry Mancini, and Ray Charles.[6]

After graduating from South Brunswick High School in 1965, he enrolled at Bard College to study English literature, having been inspired by Allen Ginsberg, Jack Kerouac, and Lawrence Ferlinghetti.[8] At Bard he met musician Walter Becker. With a revolving assortment of musicians which included future actor Chevy Chase, Becker and Fagen formed the bands the Leather Canary, the Don Fagen Jazz Trio, and the Bad Rock Band.[9] Fagen described his college bands as sounding like "the Kingsmen performing Frank Zappa material".[10] None of the groups lasted long, but the partnership between Fagen and Becker did. The duo's early career included working with Jay and the Americans, for which they used pseudonyms. In the early 1970s they worked as pop songwriters for ABC/Dunhill Records, which released all of Steely Dan's 1970s albums.

Donald Fagen met Walter Becker in a coffee house at Bard College in 1967.[11] They began to form Steely Dan in the summer of 1970, after a Village Voice ad for a bassist and keyboard player with jazz chops was placed by guitarist Denny Dias, which was answered by Fagen and Becker. Denny Dias was immediately impressed by the pair's abilities, and particularly by the fact that they already had a whole stack of original material.[12] The group's first lineup was assembled in December 1971 in Los Angeles, California, where Becker and Fagen had relocated to work as staff songwriters for ABC/Dunhill. Becker and Fagen formed the core of the band and wrote all the songs, with Becker on bass, and later lead guitar, and Fagen on keyboards and vocals.

After the release of their third LP in 1974, the other members left or were fired from the band, which evolved into a studio project headed by Becker and Fagen. Steely Dan's bestselling album was 1977's Aja, which was certified platinum. Three years later, they released Gaucho. Their next album wasn't until 1995, when they released the live album Alive in America. It was followed by Two Against Nature in 2000 and Everything Must Go in 2003. A concert DVD, Two Against Nature, included material from much of the band's history.

After Steely Dan's breakup in 1981, Fagen released his debut solo album, The Nightfly, in October 1982. It was certified platinum for sales of over a million copies in the U.S. and reached 11 on the Billboard Top 200 albums list.[13] The first single, "I.G.Y.", released in September 1982,[14] peaked at number 26 on the Hot 100. The follow-up single, "New Frontier" (January 1983[15]), peaked at number 70 and was accompanied by a music video. The Nightfly was nominated for the Grammy Award for Album of the Year. In 2002, Rhino Records released a DVD-Audio version of The Nightfly in honor of the album's 20th anniversary. The bonus track, "True Companion", from The Nightfly Trilogy MVI Boxed Set is included in the Heavy Metal film soundtrack, track seven. He also contributed a solo track to the soundtrack for the 1988 Michael J. Fox film, Bright Lights, Big City, "Century's End".

During the rest of the 1980s, Fagen contributed to soundtracks and wrote a column for Premiere magazine. In the early 1990s, he toured with the New York Rock and Soul Revue.[16] Becker and Fagen reunited in 1986 to work on the debut album by model and singer Rosie Vela.[17] Fagen co-produced and played keyboards on Walter Becker's solo album debut, 11 Tracks of Whack (1994). Becker produced Fagen's second album, Kamakiriad (1993), which was nominated for the Grammy Award for Album of the Year and reached number 10 on the Top 200 albums chart.[13]

Fagen's first three albums were released in a box set, The Nightfly Trilogy, in the MVI (Music Video Interactive) format. Each album features DTS 5.1, Dolby 5.1 and PCM Stereo mix but no MLP encoded track, along with bonus audio and video content.

In 2012, Fagen toured with the Dukes of September, featuring Michael McDonald and Boz Scaggs. One of the concerts was recorded at Lincoln Center in New York City and broadcast on PBS Great Performances in 2014.[19]

Fagen frequently uses aliases. He wrote the liner notes to Can't Buy a Thrill under the name Tristan Fabriani, which he would use on stage when he played keyboards for Jay and the Americans (Becker would use Gus Mahler). On his solo albums, when he plays or programs a synthesizer part to replicate a real instrument (bass, vibraphone, horns) he will credit one of his aliases: Illinois Elohainu, Phonus Quaver, or Harlan Post.

Fagen has classified himself as both a self-taught pianist and a self-taught vocalist, although he did spend a few semesters studying formally at Berklee College of Music and took some vocal lessons in the mid-1970s as a precaution after feeling the straining effects of years of touring. Although he learned to become an entertainer, early on Fagen suffered from severe stage fright, which prompted Steely Dan producer Gary Katz to hire David Palmer to sing two songs on Steely Dan's debut album, Can't Buy a Thrill. This also led to the hiring of Royce Jones and Michael McDonald as singers in the band's tours in the early 1970s. Fagen plays the Fender Rhodes electric piano and Wurlitzer electric piano.

Fagen's cousin Alan Rosenberg is an actor who was president of the Screen Actors Guild, while his cousin Mark Rosenberg was an activist in Students for a Democratic Society and a film producer.[20]

In 1993 Fagen married songwriter Libby Titus. Although the two attended Bard College at around the same time, they did not become friends until 1987 when they were backstage at a Dr. John concert. Titus co-wrote the song "Florida Room" on the 1993 album Kamakiriad. Fagen has performed with Amy Helm, daughter of Libby Titus and musician Levon Helm.[21]

This article uses material from the article Donald Fagen from the free encyclopedia Wikipedia and it is licensed under the GNU Free Documentation License.