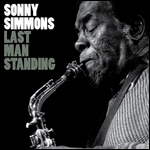 He grew up in Oakland, California, where he began playing the english horn. At age 16 he took up the alto saxophone, which became his primary instrument. He plays primarily in an avant-garde style occasionally bordering on free jazz. He was married to Barbara Donald, who played trumpet on several of his early records, including his ESP Disk titles: Staying on the Watch and Music From the Spheres. Personal problems derailed both his music career and home life, leading to divorce and homelessness. He busked on the streets of San Francisco for many years, until he resurrected his career in the early 1990s and began playing in night clubs again. He is one of the few jazz musicians to play the english horn.

In the early 1960s he worked with Charles Mingus and Prince Lasha, before recording his own LPs for ESP-Disk.

This article uses material from the article Sonny Simmons from the free encyclopedia Wikipedia and it is licensed under the GNU Free Documentation License.