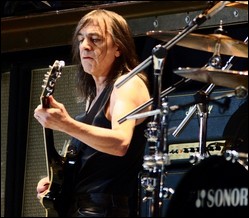 Malcolm Mitchell Young (born 6 January 1953) is a retired Australian musician and songwriter, best known as a co-founder, rhythm guitarist, backing vocalist and songwriter for the hard rock band AC/DC. Except for a brief absence in 1988, he was with the band from its November 1973 beginning until retiring permanently in 2014, due to health reasons. Young and the other members of AC/DC were inducted into the Rock and Roll Hall of Fame in 2003.

Though his younger brother Angus is the more visible of the brothers, Malcolm has been described as the driving force and the leader of the band. He also added that despite his retirement from the band, AC/DC was determined to continue making music with his blessing.[1] As the rhythm guitarist, he was responsible for the broad sweep of the band's sound, developing many of their guitar riffs and co-writing the band's material with Angus. He is married to Linda Young and has two children, Cara and Ross.

Young took a leave of absence from AC/DC in April 2014, to receive treatment for dementia.[2][3] In September 2014, the band's management announced that he would be retiring permanently.[4]

One of eight children of Scottish couple William and Margaret Young, Malcolm Mitchell Young[5] was born in Glasgow on 6 January 1953. In 1963, he emigrated from Scotland to Australia, settling in Sydney with his parents, brothers George and Angus, and older sister Margaret.[6] His older brother, Alex, remained in Scotland and later formed the London-based group Grapefruit.[7] His oldest brother Stephen was the father of his future AC/DC replacement Stevie Young.[8]

After the breakup of the Newcastle-based band The Velvet Underground (not the well-known 1960s band), Young founded AC/DC in November 1973, and soon asked Angus to join when they were 20 and 18 years old respectively. They began national touring in 1974 with singer Dave Evans.[9]

AC/DC relocated to the UK in 1976, and began a heavy schedule of international touring and recording. The first six albums of the band were produced by ex-Easybeats members Harry Vanda and George Young, Angus and Malcolm's brother, and they were also the production team behind the Marcus Hook Roll Band.[10] After the death of lead singer Bon Scott in 1980, they recorded their biggest selling album Back in Black with singer Brian Johnson.[9]

Young missed the majority of AC/DC's Blow Up Your Video World Tour to address his drinking problem.[9] He eventually became sober and returned to the band. During his absence he was replaced by his nephew, Stevie Young with some fans not realising that he had been replaced as Stevie Young bears a striking resemblance to his uncle.[11]

In April 2014, Young became seriously ill and was unable to continue performing.[12] On 16 April 2014, AC/DC released a note stating that Young would be "taking a break from the band due to ill health".[13] However, singer Brian Johnson stated that despite earlier reports, AC/DC are not retiring: "We are definitely getting together in May in Vancouver. We're going to pick up guitars, have a plonk and see if anybody has got any tunes or ideas. If anything happens we'll record it."[14] In July, Johnson revealed that Young was in hospital receiving treatment for an unspecified condition and during May recording sessions had been replaced in the studio by guitarist Stevie Young, his nephew.[2] On 24 September 2014, the band's management announced that Young would not be rejoining the band.[4] Stevie Young continued to fill in for Malcolm on the band's 2015 Rock or Bust World Tour.[15]

On 26 September 2014, The Sydney Morning Herald reported that Young has dementia and has been admitted to a nursing home where he can receive full-time care. A source close to Young was quoted in this article as saying that he has "complete loss of short-term memory".[16] Young's family confirmed four days later that he has dementia, saying that Young "is suffering from dementia and the family thanks you for respecting their privacy".[3]

In subsequent interviews, Angus stated that his brother had been experiencing lapses in memory and concentration before the Black Ice project and had been receiving treatment during the Black Ice World Tour which ended in 2010. Angus confirmed that although his brother did not play on the 2014 Rock or Bust album: "He still likes his music. We make sure he has his Chuck Berry, a little Buddy Holly." He added that AC/DC would continue according to his brother's wishes and standards: "Look, even with his health, Malcolm was touring until he couldn't do it anymore." In that same interview, Young stated that Malcolm was rehearsing AC/DC's songs repeatedly before every concert just to remember how the song goes.[17] In an interview with Guitar Player about Malcolm Young's songwriting credits in Rock or Bust, Young stated, "Mal[colm] kept doing what he could until he couldn't do it anymore, but I have all the material he was working on. There were a lot of riffs, ideas, and bits of choruses. I'd fill things in to see if we had a song. Every album we've ever done has been that way. There was always a bit from the past, a bit from what we had that was brand new, and, sometimes, just an old idea that either Malcolm or myself had worked on but we never finished. The songwriting process didn't really change, except for the fact that Mal wasn't physically there. So when it came to writing and putting stuff together, I had Stevie [Young] there with me. You see, Malcolm was always a great organizer. He always kept track of the stuff we were writing together. He'd record it, date it, make notes. My records — if you can call them that — are always chaotic. So, this time, Stevie helped me organize a lot of what was there." [18]

At the conclusion of the Black Ice World Tour, Malcolm was diagnosed with lung cancer. It was treated at an early stage, so surgery was successful and the cancer was removed. He also has an unspecified heart problem and now wears a pacemaker.[19]

Influenced by 1950s rock and roll and blues-based rock guitarists of the 1960s and 1970s, Young is regarded as a leading rock exponent of rhythm guitar.[20] He is the subject of a song (and album) title by Australian punk rock band Frenzal Rhomb: "Forever Malcolm Young".

Guitar Player magazine has stated that the secret to Young's guitar technique is playing open chords through a series of Marshalls set to low volume with little or no gain. This is contrary to a common belief of many rock guitarists that rhythm guitar should involve loud and overdriven power chords through large amplifiers.[21]

Dave Mustaine of Megadeth stated in a 2004 interview that he considered himself, Young, and James Hetfield of Metallica to be the best rhythm guitarists in the world.[22]

Young played a Red 1963 Gretsch double-cutaway Jet Firebird guitar handed down to him by Harry Vanda and elder brother George; he called this guitar "The Beast". The guitar has the neck and middle pickups (the middle was a humbucker which had been added by Young) removed and only the stock Gretsch "Filtertron" bridge pickup remains. For a short time, he placed socks in the cavities to prevent feedback. Prior to that, he used a white piece of plastic to cover the pick-up cavities.

During the Let There Be Rock era, Young stripped off the original Firebird Red finish to the maple top. Also during the Let There Be Rock Tour, he played a Butterscotch Fender Telecaster. During the Powerage era, he again removed the plastic and stuffed socks in the pick-up cavities, and also changed the tailpiece from the stock Burns vibrato to an all-in-one Badass bridge, and put a black piece of plastic over the cavity where the original tail-piece was. During the Highway to Hell era, he removed the socks. The guitar stayed like this until 1995, when, during the Ballbreaker World Tour, he replaced the Badass bridge with the original tailpiece, and removed the pick-up ring for the bridge pick-up. This is how the guitar has been since then.

Young also owned a 1959 Gretsch White Falcon that was used during the tours that supported Back in Black and For Those About to Rock We Salute You, but he said that after someone "fixed" it, it lost its distinctive sound, and so he got rid of it. It was sold on a rock star items website, along with one of Cliff Williams' Music Man bass guitars. He used another Gretsch White Falcon at shows at Hampden Park and the Hockenheimring on the Black Ice World Tour. Also in the 1980s and 1990s, Young used a Gretsch 6121, as can be seen in the AC/DC video, "Are You Ready".

Angus and Malcolm both used Marshall amplifiers. The amps stacked behind Malcolm onstage were two original Marshall 100 watt heads, one 1966 JTM45/100 and one late Superbass from the late 1960s or early 1970s. Each head powers two 4 × 12 cabinets. He also used custom-made Wizard amps on tour. His main amp, since recording Dirty Deeds Done Dirt Cheap in 1976, was a slightly modified Marshall Superbass from the late 1960s or the early 1970s. On Ballbreaker, he used a Marshall JTM45/100 with KT66 power tubes and a high B+ voltage (625 volts). In a recent interview with Marshall Law, Young mentions his two favourite amps: a Superbass and old Super amp (JTM45/100). Also Young used two Orange full stacks in London, England on 13 July 1976 while playing "Jailbreak", "Live Wire" and "Can I Sit Next to You Girl", with Bon Scott. While AC/DC were playing at Donington Park in 1991, Young used Mesa Boogie stacks.

This article uses material from the article Malcolm Young from the free encyclopedia Wikipedia and it is licensed under the GNU Free Documentation License.