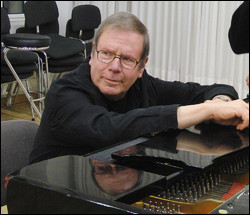 Bob Degen Jr (born January 24, 1944, Scranton, Pennsylvania) is an American jazz pianist. Much of his work has been in the trio format.

Degen attended Berklee College of Music in the 1960s and played locally in Boston while there. He was influenced by jazz musician and multi-instrumentalist Art Kreinberg and played in a trio with Kreinberg and bassist Doug Smith in the early 1960s. In the mid-1960s he played in Europe with Dexter Gordon, Art Farmer, Carmell Jones, and Albert Mangelsdorff, and recorded an album as a leader in 1968. At the end of the decade he played with Paul Motian, as well as with Gary Peacock and Buddy DeFranco in the early 1970s.

In 1974 Degen moved to Germany, where he played often with Heinz Sauer. Since then, he has played with Makaya Ntshoko, the Frankfurter Jazz Ensemble, Adelhard Roidinger, Joki Freund, Leszek Zadlo, Günter Lenz, and Uli Beckerhoff.

This article uses material from the article Bob Degen from the free encyclopedia Wikipedia and it is licensed under the GNU Free Documentation License.