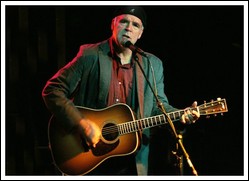 Kenny Edwards (February 10, 1946 August 18, 2010[1][2]) was an American singer/songwriter. He was a founding member of The Stone Poneys and a long-time collaborator with both Linda Ronstadt and Karla Bonoff.[3]

Born Kenneth Michael Edwards. Having been a founding member of The Stone Poneys in 1964 with Linda Ronstadt and Bobby Kimmel, Edwards next turned his musical attention to the band Bryndle (with Karla Bonoff, Andrew Gold and Wendy Waldman) five years later. In 1970, Bryndle recorded their debut album for A&M Records. The album went through many revisions before being submitted to the record company, but it was never released. Edwards subsequently returned to work with Linda Ronstadt on her ground-breaking album, Heart Like A Wheel. He then spent many years with Ronstadt as a sideman, singer, arranger and touring band member. Edwards also became a noted producer and was responsible for masterminding former Bryndle colleague Bonoff's solo albums. His session work has seen Edwards work either live or in the studio with acts such as Emmylou Harris, Stevie Nicks, J.D. Souther, Don Henley, Brian Wilson, Warren Zevon, Art Garfunkel, Vince Gill, Mac McAnally, David Lee Murphy, Jennifer Warnes, Danny Kortchmar, Lowell George, as well as a younger generation of artists including Glen Phillips and Natalie D-Napoleon. Edwards released his first, self-titled solo album in 2002. In his later years, he performed as a singer-songwriter, often with Nina Gerber accompanying, and completed the recording and release of a second solo album in 2009.

In 1964, Linda Ronstadt moved to Los Angeles to form a band with her old Tucson friend Bobby Kimmel, who had already begun co-writing several folk-rock songs with guitarist-songwriter Edwards. As The Stone Poneys, the band was signed by the late Nik Venet to Capitol and released three albums in a 15-month period in 196768: The Stone Poneys; Evergreen, Volume 2; and Linda Ronstadt, Stone Poneys and Friends, Vol. III. The band is best known for their hit single "Different Drum" (written by Michael Nesmith prior to his joining the Monkees), which reached No. 13 on the Billboard Hot 100 and No. 12 in Cash Box. (It hit #6 in the Detroit marketplace.) The song remains one of Linda Ronstadt's most popular recordings. While Stone Poneys broke up before the release of their third album, Edwards recorded and toured with Ronstadt from the mid-1970s to the early 1990s.

In 1970, Bryndle recorded their debut album for A&M Records with Chuck Plotkin helming one of his first major production undertakings. The album went through several revisions, but was never released. A single, "Woke Up This Morning," written by Karla Bonoff and produced by Lou Adler, did arise from those sessions and met with modest success. This was to be the only release from the original incarnation of Bryndle as the band subsequently disbanded. Waldman, Bonoff, Gold and Edwards established solo careers and session work before reforming in the early 1990s. In 1995, a newly recorded debut was released and the band began a tour of America and Japan. In 1996, Andrew Gold departed the band while Bryndle continued touring through 1997. After a break of more than five years, the band reformed for two house concert performances in 2002. Those two performances were edited down to a single CD released the next year. The band has been mostly inactive since their 2002 performances.

From early 2000 until his death, Edwards predominantly performed as a solo singer-songwriter. In that time he recorded and released his first self-titled solo album (2002) and a second titled "Resurection Road" (2009). He undertook showcase performances at roots-based music festivals and series including Folk Alliance and Sings Like Hell. He also regularly supported Karla Bonoff on tour while also serving as her accompanist.

According to a post on his website, Edwards died at approximately 5:30 pm on August 18, 2010 after battles with cancer and a blood disorder. Edwards had reportedly been diagnosed with the blood disorder TTP (thrombotic thrombocytopenic purpura) and had also been receiving chemotherapy for prostate cancer. He was 64 years old.

This article uses material from the article Kenny Edwards from the free encyclopedia Wikipedia and it is licensed under the GNU Free Documentation License.