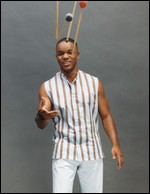 Stefon Harris (born March 23, 1973) is an American jazz vibraphonist. In 1999, the Los Angeles Times called him "one of the most important young artists in jazz"[1] who is "at the forefront of new New York music" and "much in demand as a star sideman".[2] Harris has played with several jazz luminaries including Kenny Barron, Steve Turre, Kurt Elling, and Charlie Hunter, in addition to releasing several of his own critically well-regarded albums.

Harris is a resident of Newark, New Jersey.[3]

A 1991 graduate of Albany High School, Harris earned his bachelor's (in 1995) and master's (in 1997) from Manhattan School of Music in New York City.[4] He credited his teachers in high school, saying they recognized his "passion for music early on and offered lessons and the chance to bring home instruments to practice."[4] He has stated that "Music education and performance in ensembles, like the Empire State Youth Orchestra, exposed me to me to other cultures and genres."[4] He also was the captain of the high school wrestling team.[4] Of Manhattan School of Music he has said: "The School gave me the opportunity to explore the diversity of both classical and jazz music and find the direction I wanted to go artistically."

He plays the vibraphone, has composed music, and has released six CDs.[4]

Harris collaborated with saxophonist David Sánchez and trumpeter Christian Scott in 2011 on the album Ninety Miles. They recorded the album in Havana, Cuba.[7]

As member of The Classical Jazz Quartet

This article uses material from the article Stefon Harris from the free encyclopedia Wikipedia and it is licensed under the GNU Free Documentation License.