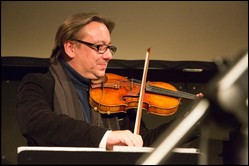 Adam Taubitz (born 7 October 1967 in Chorzów, Upper Silesia) is a German jazz and classic musician, violinist, trumpeter, guitarist bandleader, and composer.[1] From 1997 he was Principal 2nd Violinist in the Berlin Philharmonic under Claudio Abbado. He is perhaps best known for his work with the Berlin Philharmonic Jazz Group, which he established in 1999,[2] and with the Aura Quartett.[3]

Adam's father started teaching him playing the violin when he was 5, and he joined the Silesian Philharmonic six years later, then continued his studies in Freiburg im Breisgau with Wolfgang Marschner.

In 1989 he became 1st Concertmaster of the Basel Radio Symphony Orchestra under Nello Santi. In 1992 he became artistic director of the Basel Chamber Symphony, and he founded the Camerata de Sa Nostra in Palma de Mallorca in 1994.[4] From 1997 he was Principal 2nd Violinist in the Berlin Philharmonic under Claudio Abbado.

Although always very interested in many different styles of music, jazz was his biggest passion and he began learning to play the trumpet and playing jazz. In 1999 he founded The Berlin Philharmonic Jazz Group. With this group he played -and still does- as a soloist on the trumpet and the violin in Europe and the Far East.[5] He is also a member of the Absolute Ensemble New York City (leader Kristjan Järvi) and 1st Violin of the Aura Quartett Basel, which toured Indonesia in 2011.[6]

He lives at the moment as a freelance musician in Switzerland.

"What Taubitz, however, far exceeds the achievements of his classical academic career is his almost astounding mastery in improvising, which must by no means shy away from a comparison with the few really outstanding jazz violinists!" […] - Dieter Ulrich

This article uses material from the article Adam Taubitz from the free encyclopedia Wikipedia and it is licensed under the GNU Free Documentation License.