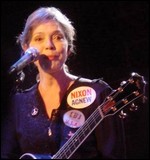 Griffith was born in Seguin, Texas,[1] and her career has spanned a variety of musical genres, predominantly country, folk, and what she terms "folkabilly." Griffith won a Grammy Award for Best Contemporary Folk Album in 1994 for her recording, Other Voices, Other Rooms. This album features Griffith covering the songs of artists who are her major influences. One of her better-known songs is "From a Distance," which was written and composed by Julie Gold, although Bette Midler's version achieved greater commercial success. Similarly, other artists have occasionally achieved greater success with Griffith's songs than Griffith herself. For example, Kathy Mattea had a country music top five hit with a 1986 cover of Griffith's "Love at the Five and Dime" and Suzy Bogguss had one of her largest hits with Griffith's and Tom Russell's "Outbound Plane".

In 1994, Griffith teamed up with Jimmy Webb to contribute the song "If These Old Walls Could Speak" to the AIDS benefit album Red Hot + Country produced by the Red Hot Organization. Griffith is a survivor of breast cancer which was diagnosed in 1996, and thyroid cancer in 1998.[2]

I was struck by how perfect everything was about her singing, her playing, her talking. I realized from the get-go that this was someone who was a complete professional. Obviously she had worked a long time to get to be that good.[3]

Griffith suffered from severe 'writers block' for a number of years after 2004, lasting until the 2009 release of her The Loving Kind album, which contained nine selections that she had written and composed either entirely by herself or as collaborations.

After several months of limited touring in 2011, Griffith's bandmates The Kennedys (Pete & Maura Kennedy) packed up their professional Manhattan recording studio and relocated it to Nashville, where they installed it in Nanci's home. There, Griffith and her backing team, including Pete & Maura Kennedy and Pat McInerney, co-produced her album, Intersections over the course of the summer. The album includes several new original songs and was released in April 2012.

In addition to her own songs, Griffith is well known for her versions of other people's material, usually by contemporary singer-songwriters.

Griffith won the 1994 Grammy Award for Best Contemporary Folk Album for Other Voices, Other Rooms. In 2008, the Americana Music Association awarded her its Americana Trailblazer Award; Lyle Lovett, who contributed backing vocals to some of "The Blue Moon Orchestra's" recordings, had won it before her.

Nanci refers to her backing band as "The Blue Moon Orchestra." This reference is believed to have been drawn from both the title of one of her earliest albums, Once in a Very Blue Moon, and its title selection, which reached #85 on the Billboard Hot Country Songs chart in 1986.

Griffith's high school boyfriend, John, died in a motorcycle accident after taking her to the senior prom, and subsequently inspired many of her songs.[1]

This article uses material from the article Nanci Griffith from the free encyclopedia Wikipedia and it is licensed under the GNU Free Documentation License.

Walter Braunfels Serenade für Orchester Es-Dur op.20
Update Required To play the media you will need to either update your browser to a recent version or update your Flash plugin.